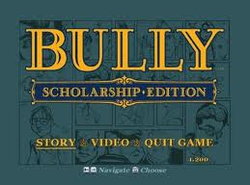 I tend to like to review the original versions of games before I review their remakes, but, as I’m sure you can tell from the title, this game is actually a remake. I’m writing this review because I don’t think it’s likely that I’ll ever get a chance to play the original. Therefore, this, in my head, is the definitive version.

Anyway, this game, made by Rockstar, is about a troublesome boy named Jimmy Hopkins who has been taken to a boarding school (Bullworth Academy). At first everybody pretty much hates Jimmy, but you do various tasks and favours for people and earn the respect of different groups. These tasks vary from things such delivering items, to fighting Christmas elves. The story is all quite fun and light-hearted, and it all seems to be a big parody of the way in which school life tends to be perceived.

You play the game by walking around a big map (the town of Bullworth) and talking to different people who need your help. Jimmy can walk around until 2am (in-game time) at which time he will just fall on the ground and sleep. You’re supposed to get Jimmy to bed before he sleeps in the middle of the streets (which will get you mugged) and throughout the game you earn various houses where you can spend the night. The world is very nice too, there’s a carnival, a beach, a country path and various other cool places to explore. Even if you don’t want to progress in the story, you can have lots of fun walking around the map and finding all of the little secrets hidden everywhere.

You’re given pretty much complete freedom too. Jimmy, as a school boy, obviously has lessons which he needs to go to, but you can choose simply never to attend them. Lessons if you do go to them, are fun little mini-game (e.g. an anagram mini game for English lessons), and if you don’t attend, things go on as normal, except prefects are looking for you. You don’t even need to follow the law, you can make graffiti on the wall or beat up random people in the street. Bear in mind though, you’re a teenage boy, so, you’re no match for the police. You can also do nice things too, such as getting a job mowing lawn, or helping random strangers with problems.

I enjoyed this game very much, so I will give it a 9.4/10. I should also add that, while I haven’t played it, the Xbox 360 version may be very slightly better than the Wii one, since it has improved graphics, but I’ll still give the same score to each,