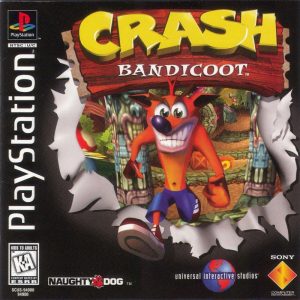 Growing up, I always used to think Crash Bandicoot looked really cool. I never really had any of his games as a child, but I wanted them. I even had a couple of toys that you get out of a machine when you put £1 in. Now that I’ve finally played it as an adult, I can see that I would have loved it if I had played as a child.

It’s basically a mixture between classic 2D side scrolling games and early 3D platformers and as those are two things that I enjoy very much, I had a lot of fun with it. Some levels are standard side scrollers, some levels have you moving forward or backward down a set path and other levels are a little bit of a mixture.

A lot of the time, with these older games, you find that the controls have aged badly, but that is certainly not the case with Crash Bandicoot – it felt very tight. When you lose, it feels like you’ve lost because you jumped at the wrong time (or made some other mistake) and when you win, you feel like it was down to pure skill. This fact alone should be very appealing to a lot of people.

The real icing on the cake is how nice all of the game’s environments are. Sometimes you’re taking a path down a jungle. Sometimes you’re exploring an ancient temple. Sometimes you’re floating down a river on a leaf. Other times you’re on a rickety bridge up in the clouds and it’s really annoying… but I digress. It’s probably just nostalgia talking, but I love seeing natural environments created with early 3D graphics. I will admit, though, that they did reuse certain level archetypes a few too many times, meaning that it did get a bit repetitive from time to time.

The biggest problem this game has is its difficulty. It can get really tough at times. You’ll have to jump off moving platforms to land on (and bounce off) flying enemies, while avoiding other enemies and timing anything slightly wrong will lead you falling off the screen and being sent back to the last check point. More casual players are likely to have a lot of trouble with later levels – I certainly did! It was so bad that I almost lost interest in the game. Even saving the game becomes difficult, because it depends on you finding secret tokens within the levels and then successfully completing a tricky mini game. This then means that you end up having to play the hardest levels multiple times. If you’re aiming for 100% – good luck to you. That is going to be extremely hard.

Nonetheless, while the difficulty is problematic, I still think that this is definitely worth playing. You may give up before the end, but the earlier levels are a lot of fun. It’s a game with a lot of historical significance (Crash was kind of Sony’s mascot at the time) and one which holds up pretty well.