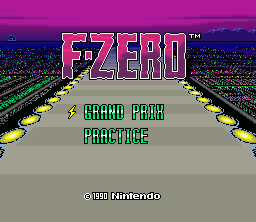 F-Zero is the first game in Nintendo’s series of futuristic, high-speed racing games. This first instalment was originally released on the SNES, which might cause you to worry that out-dated technology will render it unenjoyable (I’ve certainly played some older racing games which were pretty bad) but rest assured, this is a fun game which was ahead of its time.

Really, it’s quite a simple premise and a fairly simply game. You choose one of four hover cars, then use it to race around several futuristic tracks. It’s not a simple case of pleasant, safe racing though. Often there are huge jumps to make, mines to avoid and the other racers are always trying to ram you into the electric barriers which run along the sides of every track. If you’re not careful, the damage will literally cause your vehicle to explode (and, subsequently, you will lose.)

There’s may not be much to it, but there are three big reasons that I like it. First of all, the soundtrack. The music in the game is great and it really suits the feeling of driving along at extremely high speeds. Secondly, visually, it looks pretty nice and there’s a lot of beautiful background scenery. Thirdly, finally and most importantly, I feel like the controls are really tight. It can be quite a difficult game at times (certain obstacles are quite tough to maneuver) but finally being able to come first in a race was so satisfying, because you knew that it was skill that won you the race and nothing else.

Quite jarringly, there’s no multiplayer mode. I am sure that many will be disappointed that there’s no opportunity to play this game with friends. It is a bit of a shame that this option is lacking, but I don’t think it’s too much of an issue since it’s still fun when playing alone.

It’s also worth noting that this game contains the debut appearance of Captain Falcon, who has gone on to become something of a Nintendo icon. But don’t get excited if you were looking forward to seeing him in action – his appearance boils down to nothing more than a small silhouette of a head in the driver’s seat. It’s only through supplemental material released with the game that you really know it’s him.

Overall, this game is an interesting piece of Nintendo history and still fun to play to this day. If you enjoy racing games, then I definitely recommend that you give it a try. Be warned that the difficulty can be occasionally frustrating, though.