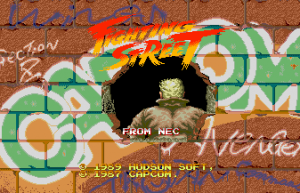 I had often heard people talk about Street Fighter II as if it were one of the best games ever made – a real classic, but strangely I never really heard anything at all about the first Street Fighter (a.k.a. Fighting Street). When it was released on the Wii Virtual Console, I was quite excited to download it and finally get into the series.

It turns out that nobody talks about the first game because it’s terrible. You play as the iconic Ryu (who I am sure most people will recognise) and he travels around the world fighting different people to prove his strength. You face ten different opponents from Japan, America, China, England and Thailand (two per country) and some of these fights take place at historic landmarks (such as the Great Wall of China or Mt. Rushmore.)

The concept certainly isn’t a bad one and the cast of characters is interesting and colourful. The problem is that the controls are really stiff and they hinder literally everything that you do. Every fight was really difficult and the only way I was able to win was by mashing the buttons mindlessly. There’s not much else I can say about this, although these could honestly be the worst controls I have ever encountered in a game.

But, as much as controls are the most important thing to get right, it is possible to take enjoyment from games with poor controls. For example, the 2006 Sonic the Hedgehog,which had awful gameplay, but still had a good soundtrack and some nice scenery. Unfortunately, this game has no redeeming features. The music is bad and the other sound effects are terrible – when somebody is knocked to the floor, there’s no bang or crash sound, instead it goes “blap” like somebody just dropped a cheesecake on the floor.

Something else I want to mention is the voice acting. You’re probably thinking that a game from 1988 wouldn’t have voice acting because the technology at the time wouldn’t have allowed for it, which would be fine and nobody would have complained. But for some reason it does have voice acting, except the sound quality is really, really poor and one person does all the voices. When you lose a fight, the opponent says “You’ve got a lot to learn. Try again kid!” and it sounds like it’s being said by somebody who doesn’t actually speak English, but is just reading the words spelled out phonetically. Since it’s really hard, I heard this so many times and it got really annoying.

So… there’s nothing good I can say. Not really. The best I can say is that it started the Street Fighter franchise which did later contain actual good games which wouldn’t have existed without this – although it’s hard to see how it ever got a sequel. Perhaps the version I played (the Turbo Grafx 16 version) is greatly inferior to the original, perhaps one day I’ll be able to play and review it to compare. As things stand, this is the worst game I’ve ever played.