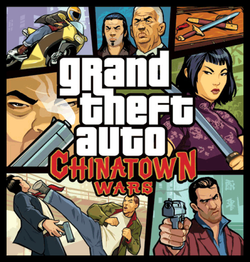 (There are three versions of this game, one for DS, one for PSP and one for iOS. They are all mostly the same, but have some minor differences, this review is based on the DS version, the only one I have played.)

This instalment in the Grand Theft Auto series is set in the world of Grand Theft Auto IV, but it is entirely standalone. In this game you play as Huang Lee who has recently moved to Liberty City following the death of his father. He has brought with him a sword which is a family heirloom and intends to deliver it to his Uncle Kenny. Sadly, assassins come along, kill a bunch of people and steal the sword. From then on, you do missions for Uncle Kenny (and various other people you meet throughout the game) in the hope that you will eventually find out who stole the sword and how to get it back.

This game gives you an almost (but not quite) top down view of the large world of Liberty City. There are icons on your map of where to go to find yourself new tasks, but there’s no hurry to go to them and you can basically do whatever you want and on your own time. Outside of progressing the story, tasks include: go karting, drug dealing, finding and destroying security cameras, joy riding, or even more peaceful things like a stroll in the park or at the beach. Liberty City really is quite an immersive world, and you can have a lot of fun just driving/walking around it and exploring; there’re lots of secrets hidden in all kinds of places. Sometimes you’re given tasks such as constructing a sniper rifle, and in these instances you have to use the touch screen in order to put things together, I always enjoyed these small touch based tasks.

Basically, this game is a bit of an over the top crime romp. You can drive around fighting enemies in tanks or bulldozers, tossing grenades at them, setting them on fire with a flamethrower, or just completely hacking them to pieces with a chainsaw. But one thing I felt the game lacked was the inclusion of helicopters or any other airborne vehicles, they would have been nice additions. One thing to bear in mind, though, is that this game is very explicit: as well as sometimes being a bit gory, there are also instances of bad language and many overt drug references. As long as that’s not an issue for you, I think you’ll probably enjoy this game.

Buy it here for DS.

Buy it here for PSP.