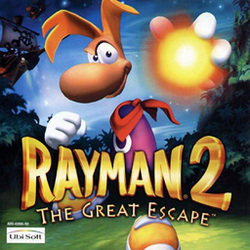 While this game is the second in the Rayman series, it has no strong connections to the first game (other than featuring Rayman as the main character) and there’d be absolutely no confusion if you were to play this game with no prior knowledge.

The storyline is a fairly basic one: the Glade of Dreams (which is the place where Rayman and his friends live) has been invaded by robotic pirates who have captured and enslaved most of the inhabitants. Rayman then escapes and has to rescue everyone and defeat the pirates, occasionally with the assistance of various friends..

While every level in linear in that it has a starting point and an exit you have to get to, they are also full 3D worlds which you are free to explore as you go through, each world having a number of Lums (little fairy things) hidden in them for you to collect. There’s also a very nice variety in the levels too, including swamps, haunted caves, volcanoes and much more. The worlds are all very enchanting, each of them has a very nice soundtrack to go along with them and the graphic style makes them all look eerie and mysterious. Plus, there are lots of convenient check points in the levels and you do not have a limit on lives, which means that while it can occasionally be hard it is never hard to the point of annoyance.

There are a few downsides though, for example the music very ungracefully changes from one track to another when going to different areas and this can be rather annoying. Also, I do think it can be bothersome when there is an enemy right after a check point as you’ll spend a while defeating them go on, die elsewhere, then every time you go back you’ll have to fight it again. Plus, it is quite short over all. Nonetheless, these things do not change the fact that it is one of my favourite 3D platformers and an all-time classic.

Buy it here for PC.

Buy it here for Dreamcast.

Buy it here for PlayStation.

Buy it here for DS.

Buy it here for 3DS.