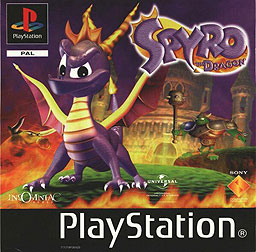 Spyro the Dragon is one of those early 3D platformers from the 1990s which helped to make the genre become very popular. At the time of it’s release, I did not own a console which could play it, so it was only very recently that I first played Spyro. A part of me worried that it would seem dated and the fact that I had not played it at the time would mean that I could never enjoy it to any large extent. Thankfully, these fears turned out to be ungrounded.

The story is a relatively simple one. The dragon citizens of the Dragon Kingdom are suddenly turned into statues as the result of an unprovoked attack from an evil monster called Gnasty Gnorc, who also stole all of their treasure.  Spyro then heads out across the lands in order to turn the dragons back to normal and recover the treasure.

So, basically, this has you travelling to several different open 3D areas (caves, swamps, mountains) and exploring them to find all of the collectables.  These levels are generally quite linear (with a set exit and check points along the way) but they all have lots of secret paths and areas. Completely clearing a level out of its treasures and enemies is actually very, very satisfying. It is occasionally very hard to find some of the secrets though.

The worlds all have a whimsical, fantastical feeling to them. It felt like exploring a fairy tale world, in fact, and I liked that a lot. The music does a lot to help capture that enchanting, mysterious feeling too. However, there are occasionally Gnorcs (a species of monster who are the enemies in the game) who use items of modern technology (like machine guns and planes) and I enjoyed the weird humour that this contrast provides. In a lot of ways, it reminded me of Banjo-Kazooie – a game from the same era and an all-time favourite of mine.

However, as much fun as I did have with it, there were a couple of setbacks. For example, I don’t think that the game’s control scheme is bad, but it does take a little while to get used to. I think it’s because Spyro moves on four legs and most game characters don’t, I’m not sure. It only took me an hour or so, but at first, it did seem tricky to move around properly.

Overall, if you’ve played other games in this style, you’re sure to like it. Something about being put into a 3D world and being left to find/defeat everything in it is really appealing to me. I suppose some people might think of it as too simple, but I think it’s a formula which can lead to hours of fun. Indeed, once you’ve completed the main story, there’s a kot of incentive to keep playing. Spyro himself is pretty loveable too.