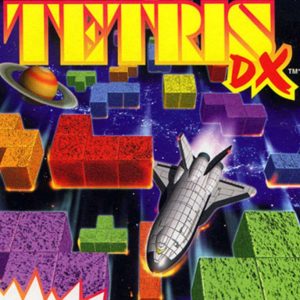 I was quite excited when I saw a cheap copy of Tetris DX in a local pre-owned games shop. I’d wanted it for quite a while, although, strangely, I didn’t really know very much about it. To be honest, I had the impression that it was just the same as the earlier Game Boy Tetris, just with added colour. In reality, it’s actually quite a different game (or as different as two version of Tetris can be.)

The first change is something that you’ll notice as soon as you turn the game on. It has save files. The original could not save at all, which is very annoying for a game like this. But this time, you register your name and then it automatically adds you onto the score boards when you do well and it keeps track of the total number of lines you’ve cleared, which is pretty cool. Essentially, you can have several different “accounts” and then whoever is playing will always have their high scores attributed to them.

Aside from the classic Marathon Mode (which continues to be endlessly enjoyable to this day) they’ve also added Ultra Mode, 40 Lines and Vs. Com. Ultra Mode has you getting as many points as possible within a three minute time limit (good for when you know you have limited time.) 40 Lines has you clearing 40 lines as quickly as possible and Vs. Com has you playing against a computer player in the same way that you might play against a human player (which is also an option.)

But this game has one big problem. It’s going to sound so petty when I say it, too. Anyway, I’m sure you know the what the Tetris Theme A music is, don’t you? That classic piece of Russian folk music (otherwise known as Korobeiniki) which is really catchy and which everybody associates with the game? The music that you love listening to while you play Tetris? Well, it’s not really in this version. You have a choice of music tracks for when you play and they’re all quite boring and forgettable. The tune does make a very minor cameo in one of the little animations you get when you get a high score… but that’s not good enough!

Honestly, I feel bad saying this, but even though this game has added nice colours and and new modes, I can’t say that I enjoy it more than the original, because it’s lacking the original’s excellent soundtrack. Music plays a big role in my enjoyment of a game. If it weren’t for the fact that this one can actually save (which is a big plus) I’d probably have to say that it was worse than the original. As it stands, they’re about even.