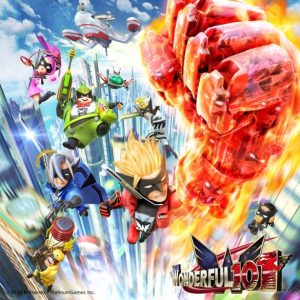 When I first heard about The Wonderful 101 I was quite excited because it seemed very unique. It was developed by Platinum Games and published by Nintendo (a winning combination) and based on a very interesting premise too; you lead a group of 100 people around and have them go into different formations to fight off robots and alien invaders. I was imagining a more urban version of Pikmin (a game I quite like.)

I eventually was able to get the game for free, as part of a deal when I bought Mario Kart 8 (which was pretty cool.) There were a few things I was quite impressed by when I started playing: the graphics created a nice world in which all of the characters looked like shiny plastic toys, I liked this because it made me nostalgic for these little robot toys that I used to collect. There was also a lot of over the top action which was entertaining to watch and fun to be a part of. The storyline also seemed well fleshed out and I enjoyed watching the interactions between its quirky characters. The story ended up having much more emotional depth than I could have expected and some characters who initially seemed fairly two-dimensional later got some good development. Also, not something I knew right away, but Bayonetta, Jeanne, and Rodin (from Bayonetta) are secret unlockable characters, too. I was pleased with all of these things.

However (and I’m afraid that this is a big “however”) I didn’t really enjoy the game because I felt like it had bad gameplay. As I mentioned earlier, you lead a large group of people as you fight back against alien invaders. You do this by drawing different shapes on the Wii U gamepad, which then transform those people into different things, such as a sword, a gun and a fist. The problem was that it seemed like it could barely ever correctly identify what I was drawing – you may say that I’m bad at drawing, but other games with similar mechanics didn’t give me the same problem.

The lack of functionality when it comes to the drawing was especially frustrating in the middle of fast-paced fights, but what was even more annoying was the terrible camera. You never seemed to be able to see properly (and it had that annoying problem where the game’s characters should logically be able to see things, but you, the player, cannot.) This gets even more annoying when you enter buildings and have to use gyroscopic controls in order to move the camera. They just didn’t work well at all.

Add to this the fact that the game is really hard and doesn’t give you much time to learn it’s complicated combat methods and, overall, you’re left with a recipe for a highly unenjoyable game. After I changed the difficulty from “Normal” to “Easy” I did find it a little more more enjoyable though, so I advise playing on that same game mode on your first playthrough (if you do decide to buy this game.) I also found that I started to enjoy it more towards the end, due to an increased variety of gameplay, which meant that I spent less time doing things that were annoying and more time trying new and exciting things. There were definitely bits throughout the game (and especially near the end) which were fun, but there simply weren’t enough of these.

It’s a shame because I feel like the game had the potential to be really good, but sadly, it wasn’t really good at all. I know some people love it, but it’s not something that I think will have a very broad appeal and now that I have completed it, I don’t imagine I will ever play it again.