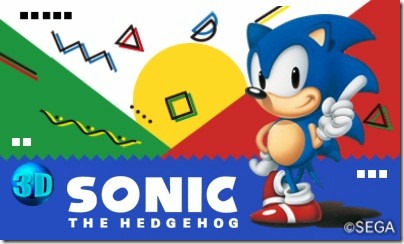 There were several classic games rereleased on the Nintendo 3DS with added polish and 3D visual effects. These were mostly NES games, but Sega got involved too and since Sonic the Hedgehog is probably the most well known game that Sega has ever made, it’s no surprise that they chose to give it the 3D rerelease treatment and so 3D Sonic the Hedgehog was born.

If you’ve read my review of the original game (and it’s linked in the above paragraph, if you are interested) you’ll know that I didn’t actually like it very much. With this in mind, you might find it strange that I would then buy another version of it. Well, my reason for doing so is that a good friend of mine had recommended it very highly, claiming it was one of the best ways to play and then, some time afterwards, I saw that it was on sale and very cheap. I thought I may as well.

So I did some research. I assumed that there must have been some significant changes to the game’s engine and physics. It must have been tweaked to be brought up to the standards of modern games, I thought. It turns out that it’s pretty much the same as the original. There are essentially only three additions: Sonic can do spin dashes now (which makes certain parts a bit easier), effects have been added so that you can play the whole game in 3D and save states have been added so you can save and reload at any point.

I was amazed by that, because playing it was a completely different experience to playing the original, even though, really, it should have been the same experience. Could it just have been because I was playing on the Nintendo 3DS which is one of my favourite consoles? Maybe it was because, by this point in my life, I had a lot more experience of playing classic Sonic games. I don’t know. There were probably a wide range of things effecting my enjoyment, including the fact that I played the original during a much worse period of my life.

I guess it just highlights how subjective our opinions of video games (and, indeed, all art) must be. Is my original review now invalid? No, I don’t think. It captures my thoughts and experiences of playing that game at that point in time, just as this review captures my thoughts and experiences at another point in time. The appreciation of all art is subjective and we can only ever explain our own impressions of something and even these impressions will change over time.