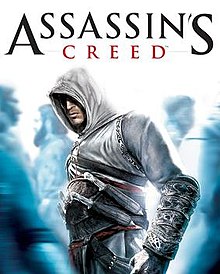 Of course, today, Assassin’s Creed is one of the biggest names in modern gaming. However, after playing the first game, I was honestly surprised that it was able to survive beyond a single installment. Now, I don’t want to say that this was a bad game, but it certainly never felt like anything special and was usually either frustrating or boring.

The game follows the life of a man named Altaïr who gets sent off to assassinate different people in Jerusalem, Acre and Damascus. As an added twist, you’re not actually seeing things from Altaïr’s point of view, rather from the point of view of Desmond, a modern day descendant who is able to relive the experiences of his ancestors through a machine called the Animus – which he is being forced to do by an organisation called Abstergo.

In terms of Altaïr, there’s very little in the way of story – it’s basically go to your boss (Al Mualim), get told who to kill, find and kill them, then come back and start the cycle again. I found that the Desmond side of the story was far more interesting, but then all you ever do when you play as Desmond is get out of the Animus and then walk across the room to your bed, which isn’t very thrilling.

Playing as Altaïr can be quite fun. As a highly skilled assassin, he is able to climb up any walls he can get a grip on, which provides a nice element of freedom and exploration. You also get taught various different methods of killing people, which can be performed by pressing the right combination of buttons during combat. When I first started playing, I kind of enjoyed all this… but I started to get bored when I realised there wasn’t much else to it. Problems also began to become quite obvious before long as well.

While your climbing abilities are great for exploration-based gameplay – there’s no reason to explore. There are some nice bits of countryside, but they’re literally just paths to get between the three cities. Then when you’re in the cities, there’s nothing to find or do: no NPCs to talk to, no shops to visit, the same few tasks you get everywhere throughout the game (pick-pocketing documents from enemies, defending people from abusive guards, listening in on enemy conversations and, of course, assassinations) and that’s literally it save for a few pointless collectable trinkets. You’ll also find that the climbing doesn’t work that well – often Altaïr climb any higher, even though there’s clearly something to hold on to and sometimes he just won’t do what you want and ends up falling off the roof.

It’s probably not that much of a long game, but finishing it felt like an eternity. Just the same monotonous tasks over and over while you climb around the same three dusty, empty cities (you will find really, really annoying people on the streets though, who repeat the same bits of dialogue over and over). You’ll also find that the town guards will end up fighting you all the time (even when you don’t do anything wrong) and these fights are long and boring. With no levelling up and no in-game currency, there’s literally nothing to gain from fighting them either.

One thing I will say in it’s favour is that the very last bit is really quite intriguing. It wasn’t what I expected at all and I was really interested to find out more. The problem is that it ends as soon as it starts to get good (and kind of abruptly.)

So maybe buy this game if you see it for £1 somewhere (and you often do) then play it for the hour or so that it’s fun, then forget about it. The ending is pretty cool, but I don’t know that it’s worth going through all of the hours of boredom to get to it.