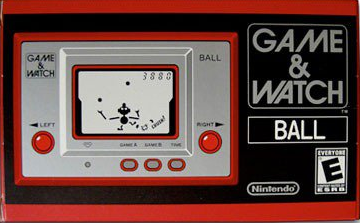 Ball was the game which started off the Game & Watch line. Historically, this makes Ball very significant. Not only is this a very early video game from Nintendo, but it’s essentially the originator of every handheld gaming console they’ve ever released. So is it any good?

Well, being the first Game & Watch, it’s actually quite a bit different to the others. Later games all tend to follow the system of repeating an increasingly difficult task to see how high a score you can get before you lose three lives. Ball is different in that there are no lives. You play as an anonymous juggler (perhaps Mr. Game & Watch) whose hands move simultaneously. They can either both move a bit to the right, or both move a bit to the left. You’re juggling two balls (three if you choose hard mode) and you just have to keep getting the hands in the right positions to keep the balls going. If any of the balls touch the ground, it’s game over. You get one chance. So it’s a little more unforgiving than the others in that regard. On the other hand, in hard mode, every single point is worth ten, which means it’s a lot easier to get higher scores than in easy mode!

I do enjoy Ball as it’s nice and simple and the simple ones are often the most addictive. However, only having one life does lessen my enjoyment as it means I end up losing much faster than I would otherwise. But I think Ball is well worth a try because it is not only a historic curiosity, but a fun historic curiosity… Even if it is a bit basic.