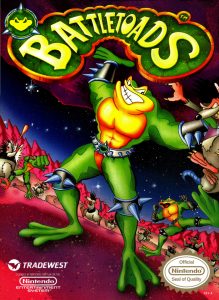 Battletoads is one of the earlier games made by British developer Rare and it has a reputation for being one of the hardest games on the NES – these two facts meant that I was quite keen to give it a try for myself. Having now played it, I can say it certainly lives up to it’s reputation in terms of difficulty…

I think I should probably talk about the difficulty first, because it is a enormous aspect. I played the game via the compilation Rare Replay which brings with it two modern conveniences: the ability to create multiple save states and the ability to “rewind” the game if you make a mistake. You would think that with these features, any game would be extremely easy, but you would be wrong. Even with constant save states and rewinds, I still really struggled to beat Battletoads. Perhaps I’m just terrible at games (and I am) but this is definitely something to keep in mind if you’re going to play the game on a NES. I think you would literally have to spend hundreds of hours playing the game in order to complete it, because you’d need to master some really tricky strategies.

Anyway, now that you’ve been warned about the difficulty, let me tell you about what this game actually is. You play as the big tough guy Battletoads who fight their way through a space army (ruled by the Dark Queen) who have kidnapped a princess and one of your friends.  The story may be very generic, but I feel like the toads are given a nice level of characterisation through their animation (which was quite rare for the time) and the Dark Queen has quite a lot of dialogue too, which I also liked.

In terms of gameplay, it never really seems to do the same thing more than once. Sometimes you’re riding vehicles, sometimes you’re on foot. Sometimes you can move in all directions, sometimes you can move in two. There’s a nice level of variety which keeps the game fresh. But one thing every level features is enemies which you have to fight though. The fighting in this game is quite entertaining as the toads’ hands and feet grow to comical sizes as the deal powerful blows. It’s quite a satisfying combat system actually. There are two levels which I would like to warn you about in advance: one where you’re racing a anthropomorphic rat and one where you’re riding a unicycle which can go up walls. These are very, very hard (especially the unicycle) and if you want to beat them without assistance, it’s going to take an incredibly long time. The game also has cooperative multiplayer, but this is only going to make things harder (not that it’s not impressive.)

While it’s not that relevant to the game as a whole, I’d like to talk about how this game looks through they eyes of a Donkey Kong fan (me.) The soundtrack by David Wise is sure to put you in mind of Donkey Kong Country, which he also did the music for. There are also small little things here and there which will bring to mind small little aspects of Donkey Kong Country. It’s nice to look at Battletoads as a kind of prototype for the later game. Interestingly, there was also a bit where you’re on red girders jumping over barrel-like objects which could have been a reference to the original Donkey Kong (which is possible, since there is an obvious Space Invaders reference in it too.)

Overall, I enjoyed Battletoads. The earlier, easier levels are very fun and if the whole game had been like that it would be thoroughly enjoyable and accessible to all – but it’s not and this might spoil it for a lot of people. I really struggle to know how to score this game, but I think it’s important to say that my overall impression was a positive one. If you love hard games you’ll love this, but if you hate them, you’ll hate it.