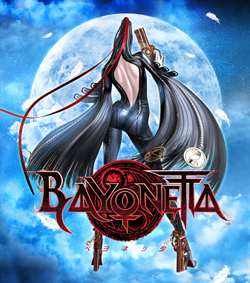 Bayonetta is a game which is really rather a wonderful. It’s full of over the top action sequences, extreme violence, wonderful Japanese music and creepy religious iconography. In a way, it’s a little hard to talk about because it is a very unique experience, but I shall do my best. I will say, simply though, that this is a good game and I enjoyed it.

The story follows an “Umbra Witch” named Bayonetta who, on modern day Earth, sets out to wipe out the angels who are not quite as benevolent as people might imagine. She has a mysterious past which we find out more about as the story progresses. “How do witches and angels move around in modern-day Earth without drawing attention to themselves?” I hear you ask. Well, the game introduces three different realms: Paradiso (which is a heavenly version of the world), Purgatorio (essentially a middle ground) and Inferno (which is full of demons) and you switch between them in order to avoid being detected.

The lore of Bayonetta seems to be quite deep and it’s clear that a lot of attention has gone into it. I feel like it’s the kind of thing which will make more sense the more times you play through it. This could potentially be a turn-off for some people (as it is occasionally hard to know what’s going on) but I kind of liked the bizarre and bewildering aspect of the game’s story. With so much thought put into the mythology, it’s not hard to imagine it as real.

So, how does it play? Well, as Bayonetta, you explore different areas and then fight groups of angelic beasts. You can use different weapons and do different attacks by pressing different button combos. By dodging at just the right times, you can slow down time, which is very useful for fighting against tougher enemies. Honestly, the combat is very difficult and you will probably die a lot. Sometimes it’s a little too hard and can even get frustrating, but then when you win a level you feel like you’ve actually achieved something. Also, if you put in the time, you will start to master the combat system and things will get easier. If all else fails, you can just play it on an easier mode.

One of the biggest appeals (for me) was the character of Bayonetta herself. Yes, she is heavily sexualised, which might put some people off, but sexualisation doesn’t cancel out the fact that she is very well developed. She’s funny and the mystery around her makes her quite interesting. She’s really quite endearing, I think.

The game was originally released on Xbox 360 and PlayStation 3, but it did later come to Wii U. The Wii U version is essentially the same, but it did add some very nice Nintendo-themed outfits. In that version, she can dress as Princess Peach, Princess Daisy, Princess Zelda or Samus Aran. These costumes provide special sound effects (from their games) and give you new moves as well – for example, when wearing the Peach or Daisy outfits, you can have Bowser attack enemies by punching or kicking through portals – I found that pretty cool.

It’s a fun game and full of bizarre and interesting settings and locations. Some of the environments and enemies have amazing designs (borrowing from old, Christian iconography) and you’ll do pretty cool things, like fighting angels on the side of a falling chunk of rock. It’s crazy. But, while it is fun, it is also quite frustrating sometimes and is definitely not a “casual” experience. Overall though, an excellent game.