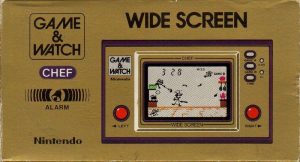 Chef is one of my favourite Game & Watches. It’s also become fairly iconic since the image of Mr. Game & Watch holding a frying pan and flipping sausages is quite well known due to his various appearances in the Super Smash Bros. series.

Like all of the best games in this quaint little series, Chef is really very simple. You play as a chef who is flipping a couple of sausages and a fish with a frying pan. They all rise and fall at different speeds, so you need to move between them to make sure that you keep them up in the air. If you fail to stand under one of them (ready to flip) as it comes down, it will fall on the floor and a sneaky mouse will run away with it. Speaking of animals, there’s also a cat who’ll cause you disruption by holding a sausage in the air every now and then, leaving you with no idea of when it will fall and when you need to move to catch it. The hard mode also adds extra food.

It’s a game that’s all about timing and keeping an eye on different things.  So simple, yet not too easy. I actually find it very relaxing to play and I think it’s a great way to pass the time. There are more than a few long train journeys where I’ve spent a lot of time trying to beat my high score in Chef!

It’s definitely worth getting if you can find some way to access it.

Buy it as part of Game & Watch Gallery 2 here.