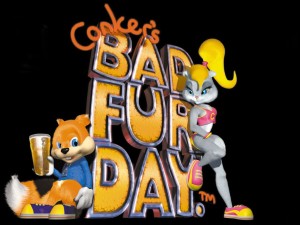 Conker the Squirrel. He was the friend of Diddy Kong. His birthday was once ruined by the Evil Acorn. Nobody could ever have imagined the strange turn his life would take in Conker’s Bad Fur Day.

Aesthetically, this game is just like a lot of other Rare platformers of the time. It looks like Donkey Kong 64 or Banjo-Kazooie and a lot of people might have expected it to be similar in tone too, but it’s not. It’s really not. Personally, I find it amazing that these things are all connected.

So how’s it different? Well, you see, this game is very adult. At first, you might think that the only thing which sets this apart is that it features crude humour and has characters swearing, but there’s so much more to it. The story is often very dark and even profound. I don’t really want to say too much about what happens in the game, because it’s often quite effective because of how unexpected most of what happens is. Sometimes you’ll laugh out loud at the humour, other times you’ll be stunned by something absolutely harrowing.

One thing I found especially interesting about Conker’s Bad Fur Day is how Conker evolved as the story went along. Conker is a very flawed person, but we get to see him progress somewhat throughout the duration of the game. I also found that I really disliked him at times, because many of his actions were just plain awful, but it was always interesting to see how he’d react to the situations he found himself in.

I also want to take a moment to say that Conker’s world felt really beautiful and I really enjoyed exploring it. I know it only has Nintendo 64 era graphics, but I think that just adds to the charm. With all the natural scenery, peaceful sound effects and the fantastic soundtrack, the world of Conker’s Bad Fur Day was a delight to explore.

Overall this game was a masterpiece. It’s very sad to think that it isn’t better known. I know it may appear to just be something that just childishly makes cartoon animals swear in an attempt to be funny (and I’ll admit, there were one or two bits of sexual humour which were too ‘on the nose’ for me), but it’s got so much more depth to it and is definitely worth a try. One of Rare’s best games.