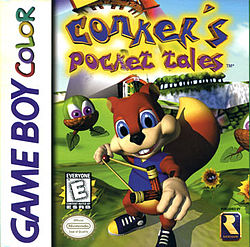 Conker may be best known for his rather outrageous appearance in Conker’s Bad Fur Day but between that and his debut in Diddy Kong Racing, he actually had one adventure in his more innocent form: Conker’s Pocket Tales.

The story is simple, but also a little strange: it’s Conker’s birthday and he is celebrating with Berri. All of a sudden, the Evil Acorn comes along and steals all of the presents, kidnapping Berri at the same time. I’m not sure why he does it, but I guess he does have the word “evil” in his name, so it’s probably just a random act of evil. Conker then chases the Evil Acorn (and his accomplice Honker the Skunk) through several worlds to get back his presents and to save Berri.

The gameplay gives you a isometric perspective of Conker as he goes through woods, castles, wild west towns and lots of other exciting locations. To defend himself, Conker uses a slingshot to shoot conkers at enemies and he also has some kind of ground pound attack too. Honestly, you feel quite limited in your attacks. Acorns are the health units for the game and, strangely, you can just hoard huge amounts of these and become almost indestructible.

Really, a lot of this game is very strange: pretty much all of the characters apart from Conker, Berri and Honker are Acorn People, which are just acorns with googly eyes. Honker and the Evil Acorn are surprisingly violent and aggressive too – the Evil Acorn threatens to murder Berri and Honker actually shoots dead a random Acorn Person. You also go to a tropical island and compete in Olympic track & field events against Honker in order to win boat pieces – I am not sure how those things are logically connected.

Being so weird makes the game quite appealing in some ways, but I also found that it could be occasionally boring. A lot of the game’s challenges just involved pushing boxes around and pressing switches, which isn’t very inspired. A couple of times I wasn’t really sure what to do and I felt like I was wandering around the world aimlessly. But it does have that “Rare charm” that is present in most of the games made by Rare. It shares a lot if sound effects with the Donkey Kong Land games which I like and if you leave Conker idle you actually get to watch him pull out his Game Boy and start playing Donkey Kong Land, complete with music! It is definitely still worth playing, if only out of curiosity. Just bear in mind that this is not quite Rare’s best work.