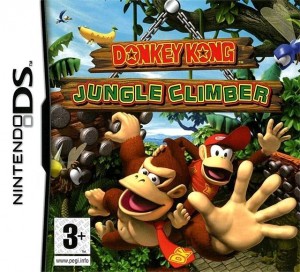 Donkey Kong: Jungle Climber features the same sort of gameplay as DK: King of Swing, but has really refined the formula in many ways.  It was the main Donkey Kong game for the DS and is a solid game all round.

The story has the Kongs enjoying a holiday on Sun Sun Island, only to spot a banana shaped spacecraft which starts to attack them. Before long they find themselves caught up in an adventure involving an alien called Xananab and the latest plan of K. Rool and a few of his Kremling underlings. There are quite a few scenes of the Kongs chatting together and even talking with K. Rool and I appreciated the fact that there was quite a lot of dialogue.

Just like King of Swing, every level is based around climbing. The good thing is though that many of the levels feature things to climb on which are perfectly natural. I like levels to feel like places and not levels and this game achieves that (most of the time.) Donkey Kong and Diddy now both go along through levels together like they did in older games and when you have Diddy he can be used as a projectile. The climbing feels very intuitive and it’s really fun to build up momentum while doing it and to speed through a level.

There were only one or two things I didn’t like about it. Firstly, Cranky Kong stops to talk to you all the time, but he’s now a helpful mentor instead of a bitter old man, making him boring and a bit annoying. Secondly, Dixie Kong is in the game, but for some reason not involved in the Kongs’ adventure, which doesn’t make sense to me. It would have been nice if she’d had a key role. Finally, at times the difficulty could be rather frustrating and when it is it’s usually down to things which are out of your control. Thankfully, this problem isn’t too regular

But on the whole, this is  a very solid entry in the Donkey Kong series and one which I enjoyed very much. It’s very fun and definitely worth a try. Rating: 9/10