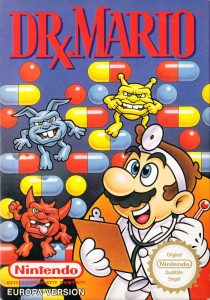 After Tetris was an enormous success on the Game Boy, Nintendo wanted to make their own game in a similar style. Naturally, Mario was incorporated into the mix and so Dr. Mario was born. I actually think the idea that Mario would become a doctor is a little weird – in the past he’d been a plumber, a factory worker, a carpenter and now becoming a doctor seems like an odd direction for his career to take. When did he study to be a doctor? I guess, perhaps, it’s really easy to master medicine in the crazy Mushroom Universe.

Anyway, each level is a bottle filled with different coloured viruses and Mario throws in capsules made of two different colours which then slowly descend to the bottom. Every time you make a row of four or more things of the same colour, they will all disappear and you have to use the capsules to make all of the viruses disappear in every level. It’s quite fun and addictive. On top of that, it has a really fantastic and catchy soundtrack. The “Fever” music in Dr. Mario is one of my favourite pieces of music from any Mario game.

The original game is available as both a NES game and a Game Boy game – the only real difference between these two is the fact that the Game Boy one has condensed, black and white graphics and only offers multiplayer over a link cable and the NES one is more colourful and allows multiplayer on a split screen. Both were released on the same day and you can treat them as a single thing.

It’s a fun way to pass a few minutes and it sounds lovely, but I do feel that it suffers by not offering any real kind of score system, meaning that there is less incentive to replay difficulty levels you have already beaten – the gameplay is not endless and without old score to beat, coming back becomes less appealing as time goes by. But it’s a fun little title and worth a look.