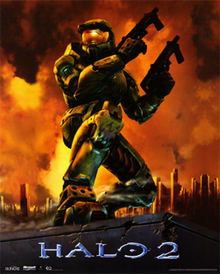 In the video game world, successful games nearly always get sequels – so the fact that Halo 2 was released a few years after the success of Halo: Combat Evolved is no big surprise. Still, I am pleased that it did get a sequel because while the first game was pretty good – this one was even better. I know that some people go so far as to consider this one of the greatest games ever made – is that how I feel too? Well, you will have to keep reading if you want to find out.

In every way, this game is better than its prequel. First, there’s the story. The first game focused mainly on the conflict between the humans, the Covenant and later the Flood. I have no issues with the original story – but I have to admit that it wasn’t particularly groundbreaking (though I did really like how the Flood were used.) This time, the Halo universe is much more fleshed out, because in some of the levels you play as the Arbiter, an alien who fights for the Covenant. Honestly, I found him a more interesting character than Master Chief – partly, because he receives a much greater degree of character development. All of a sudden, the war is much more three dimensional and the world more believable. Sadly, the ending leaves a lot to be desired (it pretty much just ends all of a sudden) and it wan anti-climax for me, but I feel that it was probably their way of luring people into a sequel… not that I agree with it.

In terms of gameplay, it’s much the same as the first game: a first person shooter with a sequence of somewhat open levels to get through. One of my issues with the first game is that the levels were clearly copy and pasted to make them bigger, which meant that they were easy to get lost in and that they could get monotonous. Thankfully, none of the new levels in this game have that problem. Plus, as well as being better designed from a gameplay perspective, they’re also much more aesthetically pleasing. I guess graphical capabilities had improved in the few years that had passed.

I should also mention that this game originally had online multiplayer via Xbox Live, which was a new and unusual thing at the time. These online services have been discontinued, but it does highlight that this was quite an innovative game for its time. (Though it does also highlight the fact that online content in games has a very short life span…)

Overall, I definitely understand why people have such a high opinion of this game. It’s fun to play, it controls well, it looks good, has a nice soundtrack, an engaging story and provides a perfect escape into the world of sci-fi. Definitely worth giving a try.