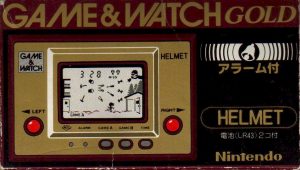 Ironically, despite being called Helmet the helmet featured in the game is so inconsequential that it may as well not appear at all. In fact, it would probably make more sense if your character wasn’t wearing a helmet – then it could have acted as a kind of cautionary tale.

Anyway, for those who don’t know, this is one of Nintendo’s Game & Watches. In this one, you leave one building and have to walk a small distance and enter another building. Sounds simple doesn’t it? Well, it’s not because there are loads of tools raining from the sky. There’s literally an infinite supply of them falling down. Thankfully, they’re all falling quite slowly, meaning that you are able to move strategically and avoid getting hit by them. You are wearing a helmet, but if one lands on you, you lose a life either way.

I think this is one of the better Game & Watches and I can get quite into it. It is quite tricky though and once you’ve been thrown off, you’re likely to get a Game Over before too long. You can be playing perfectly, then you get hit, then you’ll loose your other two lives before too long. I think it’s all about confidence and concentration – once you’ve been thrown off, it’s hard to recover. Or, at very least, that’s the case for me.

Like most of the others, you can choose to play with a harder difficulty too, but I think the normal level of difficulty is already high enough in this case. Plus, of course, it can be used as an alarm – not that I really imagine anybody doing so these days. Fans may also recognise Helmet as it was incorporated into a Super Smash Bros. stage, which is pretty cool. Overall, it’s not a bad game and worth a look, but it’s nothing earth-shaking.