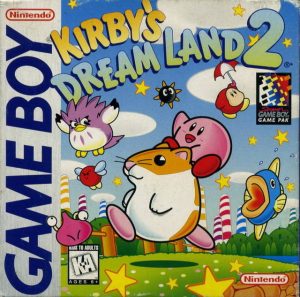 This was Kirby’s second main game on the Game Boy and I think it did a really good job of refining the formula established in Kirby’s Dream Land and Kirby’s Adventure.

Once again, King Dedede is causing trouble for Dream Land and has broken the connection between the seven Rainbow Islands. This time, however, Dedede is not quite to blame as he has been possessed by an evil force known only as Dark Matter…

Kirby has to get through several levels on each island in his quest to restore the balance. Not only is he helped by his ability to inhale enemies and absorb their power, but also by three animal friends: Rick the hamster, Kine the fish and Coo the owl. All of these animals have each of their own abilities and each of them respond differently to Kirby having absorbed different powers, which helps to add some good variation to the gameplay. My favourite was probably Kine, because I love how Kirby goes inside his mouth and he flops around on dry land.

The levels are all quite fun and the music is nice and catchy. It’s a pleasant game and always enjoyable to play. The levels are never too hard, but it’s not without its challenges. The hardest things to do is probably to collect all of the “Rainbow Drops” (there’s one hidden in each world) and this is something which is definitely worth doing, as you get a good reward for it. Thankfully, unlike the first Dream Land game, you can also save your data now.

I like this more than the earlier two Kirby games and think of it as one of the best side scrolling games on the original Game Boy. Rating: 8.1/10