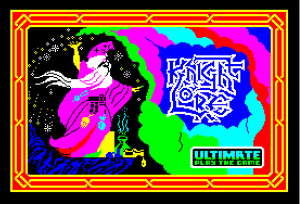 Knight Lore is the third game in the classic Sabre Wulf series of games. I felt like the first was pretty good and that  the second was okay, but much more flawed. I wondered whether this downhill trend would continue into the third title, or if I’d be pleased to find a return to the heights of the first game.

So, which was it? Well, it’s start looking over the game’s strengths and weaknesses. First, the strengths: The game introduces the idea that Sabreman has been turned into a werewolf, which is pretty cool. There’s a day and night system where he’s human during the day and in a wolf-form during the night. Again, pretty cool. The game provides an isometric perspective in an attempt to provide a 3D gaming experience. A nice ambition for the time. The character designs are all pretty cool as well and I felt like the art style of the old graphics went a long way towards making an atmospheric world. Plus, the title screen has a really great piece of music on it.

Now, for the game’s weaknesses. There’s only one, really: it controls really, really badly and the perspectives make it very hard to time jumps and so forth. This is the games only problem and it’s such a shame that it completely ruins the experience. It’s kind of like if you had a really nice car: it looks just the way you wanted it to, had a powerful engine, comfy chairs etc. etc. but, oh wait, it doesn’t have a steering wheel. Also of a sudden, it’s not a good car anymore.

It’s a shame. I’d love to be able to say this was a great game, because I think it has good potential. You’re working to a deadline to cure your lycanthropy and you need to find special ingredients so that a wizard named Melkhior can make you a potion. A cool idea for a game. I’d love to see it remade (just like Underwurlde) because modern developers might be able to do the concept justice. Until then, it shall have to remain as a not very good chapter in the life of Sabreman. Sorry, Rare.

Buy it (as part of Rare Replay) here.