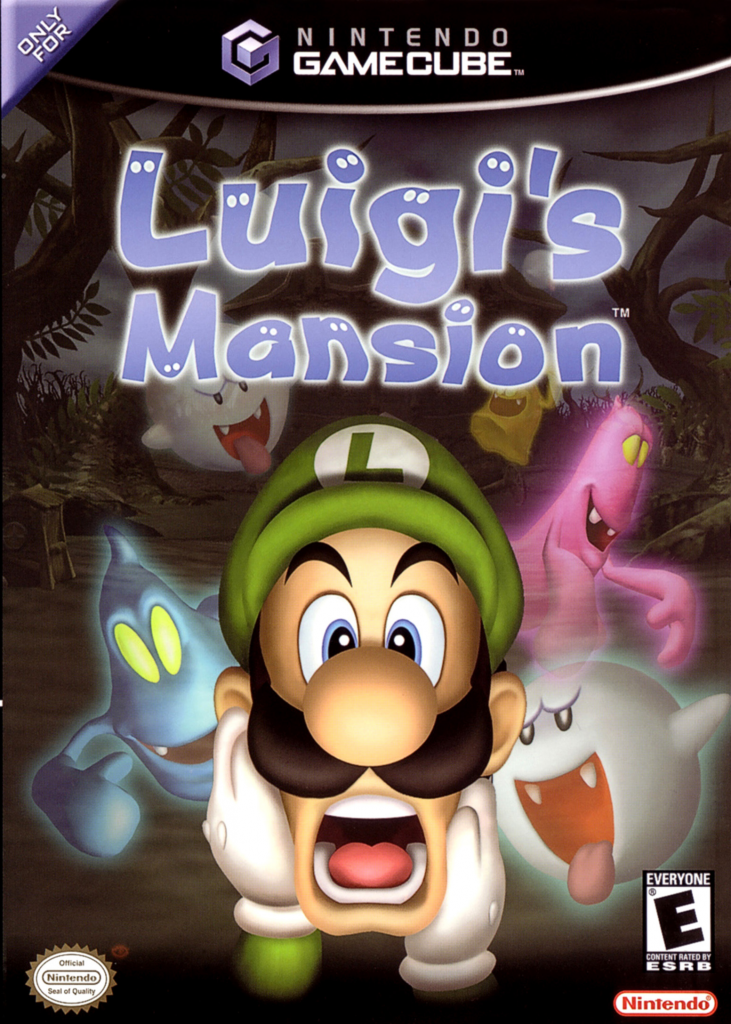 I love the Super Mario series, but like a lot of people, I feel more strongly endeared to Mario’s brother Luigi than Mario himself and so I was delighted when I found out that one of the first games on the Gamecube (Luigi’s Mansion) would feature Luigi as its main character. But that’s not all! Luigi’s Mansion also has a slightly stronger story focus than the other games in the series and a somewhat darker tone – these are two things I’d always hoped to get from the Super Mario series.

The story goes that Luigi is notified that he has won a mansion through a contest which he doesn’t even remember entering. Mario goes ahead to check it out and Luigi follows shortly afterward. When he arrives in the mansion, Mario is nowhere to be found and the whole place is full of ghosts and very sinister. Luigi is soon cornered by a ghost and doesn’t know what to do, but he is then saved by Professor E. Gadd who defeats the ghost with his invention, the Poltergust 3000 which is a special kind of vacuum cleaner. E. Gadd explains that this mansion popped up overnight and is filled with ghosts who had escaped from paintings. Luigi is trained in the ways of the Poltergust and must recapture all of the ghosts and save Mario!

Unlike other games, you’re not running around and jumping on platforms and enemies to get through levels, instead you’re slowly exploring a massive mansion. You’ll find yourself in a lot of dark, atmospheric rooms where you have to figure out how to make the ghosts appear. Sometimes you’ll just have an onslaught of smaller ghosts attacking you, other times you’ll be targeting a specific ghost. For example, in one level you have to do things with the toys in the room in order to make a ghost baby appear. The fact that there is a ghost baby in the game at all shows how this is quite a bit darker than the series usually is. It’s a nice change of pace in every regard.

Overall, I’m very fond of this game. I like getting a bit of character development for Luigi. I like the introduction of Professor E. Gadd. I like the additions to the lore of the series. I like that lots of the ghosts are actual characters, rather than generic creatures. I like that soundtrack is nice and spooky, but also that there is sometimes nothing but background noises. I like the more puzzle-oriented style of gameplay and the fact the game world is one big mansion. I guess it is a bit short and it could do with a smidgen of variation, but overall it’s a very enjoyable experience. Perfect to play around Halloween time.