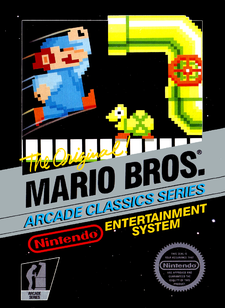 After the Mario Bros. Game & Watch (which I reviewed last week) Nintendo later released the Mario Bros. arcade game, which was then ported to numerous consoles. This is the game that most people think of when they think Mario Bros. and it’s one that was actually very popular.

As with many early games, it’s quite simple on the whole. The story goes that Mario and Luigi have gone down into the sewers to clear out some monsters that have appeared there and that’s about it. There are a set of platforms with pipes at the bottom and pipes at the top – enemies walk from the top to the bottom and you have to hit them from underneath the platform they’re on. This flips enemies upside down and you have to walk into them (and kick them off the screen) before they can flip back up. If they get to the bottom, they go through the pipes and come back out of the top.  There are four kinds of enemies: Shellcreepers (very similar to the Koopas in later games), Sidesteppers (a type of crab which have to be hit twice), Fighter Flies (which are harder to hit, because they keep jumping) and Freezie (ice creatures which can freeze platforms but which are much weaker and do not need to be defeated to win.) Every time you defeat all of the enemies, you go on to the next level, which will have a few more enemies and it just goes on forever.

It’s quite a fun game, particularly because you can have cooperative multiplayer, with one person as Mario and the other as Luigi – this is especially impressive considering when it was made. It’s also quite nice that this story kind of depicts the journey of Mario and Luigi from Earth to the Mushroom World. The main thing holding it back is that it’s controls aren’t really that great. Mario and Luigi both feel a little too slidey, This coupled with the fact that you don’t get much variety in gameplay means that I’m not enormously impressed with the game as a whole. It’s better than some other Nintendo arcade games though.