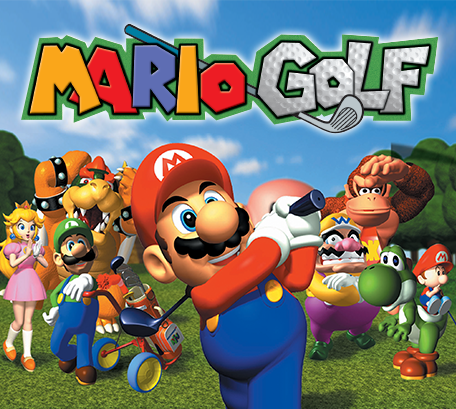 The game has no story, it’s just Mario and his friends taking time out to play some golf. There’s even a delightful cutscene of Mario, Luigi, Peach and everyone having a bit of fun on the golf course. It gives us nice little moments of character interaction and development which you don’t get often enough from this series, so I appreciate it.

In terms of gameplay, it’s all a matter of adjusting the angle and power of your shot and tapping ‘A’ at the right time. There are several different courses to play and they all have random weather conditions. You can enter a tournament in order to win cups or you can go head to head with characters in order to make them playable. There are also other modes, such as miniature golf and one where you have to hit the ball through golden rings. In particular, I probably had the most fun with the game’s multiplayer mode, where you just play golf against other people to see who can clear a course in the smallest number of shots. No matter what game mode you’re playing though, this is a game that requires quite a degree of precision and skill. The later challenges in the game are extremely difficult.

The game’s a bit weird in terms of who is playable. In multiplayer mode, you start with several characters, including Mario, Luigi, Peach, Wario and Yoshi. But in single player mode, the only familiar faces you can play as are Baby Mario and Peach. This is the first time Baby Mario was playable alongside his adult counterpart and I like this little connection to Yoshi’s Island, but it seems bizarre that regular, adult Mario has to be unlocked in this game’s single player campaign. Characters like Donkey Kong and Bowser are also unlockable (which isn’t really a spoiler, considering the fact that they are on the title screen) but you have to do an awful lot of work to get them.

In both single and multiplayer mode, you also have a selection of generic human characters. This is a bit weird, but I like it. I don’t know how to describe them other than as “normal people” because they really aren’t weird or quirky like the people you usually get in Super Mario games. One or two of these I found genuinely boring, but on the other hand there was one named Harry and one named Sonny who I became enormously fond of. They’re really charming and I would be delighted if they one day made a return in another game. It’s also worth mentioning that you can connect to the Game Boy Colour Mario Golf in order to play as your human characters from that game (a feature which is sadly absent in the Wii U version.)

Overall, it’s a decent game which I had a fun time playing. One potential downside is that the game’s golf courses are often quite generic. You get some more outlandish ones later on, but most of them are the kind of places you could find in real life and not crazy Mushroom Kingdom locations. It’s a nice “comfortable” game really, and other than an odd character roster, is exactly what you would expect.