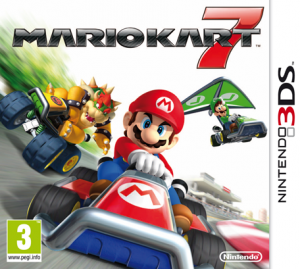 This is the seventh Mario Kart game. Some people might expect the series to have gotten stale by this point, and it does actually have a bit of a bad reputation, but I think Mario Kart 7 is very good.

As usual, you start off with eight characters, this time it’s: Mairo, Luigi, Peach, Bowser, Toad, Yoshi, Koopa Troopa and Donkey Kong. There are then nine unlockable characters, including four who had never appeared in any capacity before. I like the choice of characters in some ways, because there are fun and unusual choices in there, but on the other hand there are obvious options like Diddy Kong and Waluigi who are absent.

What I’m especially pleased with is the number of great tracks in Mario Kart 7. There’s a new track based on Donkey Kong Country Returns, two tracks on Wuhu Island (from the Wii series games), one called Wario Shipyard (which actually seems to draw from Wario Land games a little), Rosalina’s Ice World (a snowy, alien planet) and other great new tracks too. Then you’ve also got some really good returning tracks, like Kalamari Desert (from Mario Kart 64), the original Rainbow Road (from Super Mario Kart) and Airship Fortress (from Mario Kart DS.) It honestly has one of the best track selections in the series.

The unique selling point of the game is the fact that the karts can now go underwater in certain areas and sprout a glider and fly at times too. This is a fun little addition which helps to add more variety to the tracks, but it’s a bit of a minor thing. You are also given the option to race against other players ghosts with the help of StreetPass functionality, which is a good way to improve replayability. The sad thing is, that this game is a bit of a step down from Mario Kart Wii (because it has fewer characters, no 12-player races and no bikes) which I think causes people to judge it unfairly, but I still found it very enjoyable. I spent quite a large number of hours playing the game online an it’s still something I dip into from time to time. Well worth a play.