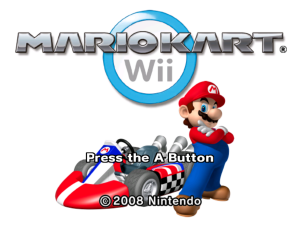 Mario Kart Wii is the sixth Mario Kart and a definite favourite of mine. I think it has the perfect combination of a good selection of characters and a great set of race tracks. A great starting point, if you’ve not tried Mario Kart before.

So let me tell you about the available characters. Right away you have Mario, Luigi, Peach, Toad, Yoshi, Donkey Kong, Bowser, Wario, Waluigi, Baby Mario, Baby Luigi, Koopa Troopa and Baby Peach. This is quite a nice selection and it’s nice to see Baby Peach incorporated after her introduction in Mario & Luigi: Partners in Time. There are then thirteen characters to unlock too! I won’t say much, other than that, as a fan of Donkey Kong games I was very pleased, also your Mii is one of them, which is nice. I was a bit sad that ROB and Petey are not in this game though.

And what about the tracks? There are sixteen new ones and sixteen returning one. Of the new ones, I thought Wario’s Gold Mine (which has you racing through a mine), Mushroom Gorge (which has you bouncing on giant mushrooms) and Grumble Volcano (where you race around an erupting volcano) were three of the best. Pleasing returns include Ghost Valley 2 (from Super Mario Kart), Desert Hills (from Mario Kart DS) and DK’s Jungle Parkway (from Mario Kart 64). But, really, every track in this game is one I like a lot (although I’m not sure what DK Summit actually has to do with Donkey Kong.)

In terms of new features there’s quite a lot as well. For the first time, you can do races with up to twelve players! This makes things very hectic, especially with new items like the Mega Mushroom. Before the Nintendo Wi-Fi service was discontinued, it had a very fun online mode and they even produced several unique challenges for people to do. Also, for the first time, you can ride bikes instead of just karts – I could never get used to them, but they add some nice variety. Finally, as it is a Wii game, motion controls were added, so you can use the Wii Wheel and control the vehicle with a kind of steering wheel, but if you don’t like motion controls, regular options are available too. I don’t like the motion controls, but I know people who love them.

Overall though, as is always the case with these games, what I loved the most about it was the multiplayer mode. I have probably spent more time playing Mario Kart Wii’s multiplayer mode than that of any other game in the series. It’s just endlessly fun. It’s all very good, but the multiplayer is fantastic. Rating: 9.5/10