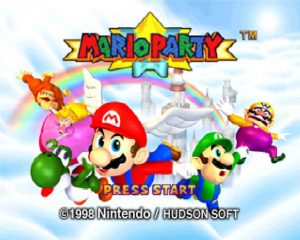 I have never been to a party where people played Mario Party, but if I did it would probably have been one of the best parties I had ever attended. I consider it to be one of the best multiplayer experiences created by Nintendo and unlike, say Mario Kart (which is also very good) this game is not a conversational killer, because you won’t be focusing solely on what you’re doing, but on what everybody is doing.

If you’ve never heard of it before (or have never played it) it is essentially a digital board game. You can choose between Mario, Luigi, Yoshi, Wario, Donkey Kong and Peach and there are different levels based on each character. You play with four people and you role a dice to see how many spaces you can move around the map. Different spaces cause different things to happen and each of the maps have several characters who will do certain things when you interact with them. The goal is to be the player with the most stars and the most coins – you get coins by winning mini-games (and there’s one of those every time all four players have moved) and then you use them to buy stars from Toad, who can be found somewhere on the map. After a set number of turns, a winner is declared.

I have a feeling that that sounds rather boring in writing, but trust me, it isn’t. There’s a lot of luck in this game and it can be quite funny to see a player lose their fortunes because Bowser randomly decided to steal everything from them, or something like that. Having said that, I don’t think people who take their games really, really seriously will  get much out of it. I can imagine someone getting quite grumpy if they have too many mishaps. You have to be able to laugh at yourself – then everyone can have fun.

Speaking of fun, the most fun comes from the mini-games. They come in several different varieties (sometimes players are all working against each other,  times they’re working in teams) and almost all of them are highly enjoyable. In one, you’re skateboarding as fast as you can to get across a bridge which is collapsing into a river of lava. In another, you’re working together to get through a haunted house and use a giant bulb to defeat an army of Boos. In particularly unfair (but amusing) one, one character dresses as Bowser and everyone tries to hit them with giant hammers, causing them to drop money each time.

There’s one unfortunate thing about these mini games though and I really have to mention it. They are literally bad for your physical health. One or two of them are built around the player spinning the control stick around really, really fast in order to make their character do different things. The problem is that in order to do this, you need to spin it so fast that you’ll blister your hand. It’s annoying. In a way, it’s a bit like an extra-large pizza from Domino’s – at the time, the pain will seem worth it,  but when you wake up the next morning and your hand still hurts, it will be just as bad as any post-pizza tummy ache.

Also, this is a game that’s made to be played with a group.  Or, at least, one other person. It’s not that the game won’t be fun if you play alone, it probably will be, it’s just that it will wear off a lot faster and you’re more likely to just get annoyed by a change of fortune if it’s just a computer player who’s taken all your money, rather than one of your friends. It does sometimes feel like the CPU players cheat as well.

But, overall, I consider this a fantastic game. When it first came out, I was absolutely blown away by it and spent hours and hours playing it with my brothers and alone too. Returning to it as an adult, its flaws are a little more obvious to me, but it’s still a game I recommend – it even manages to have unexpected story-elements! If you do ever get a chance to play (which is unlikely, so it seems as though it will never be rereleased) you should give it a try.