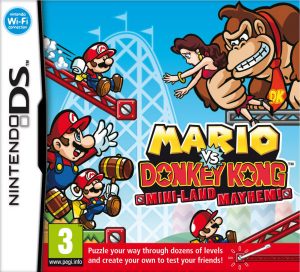 Once again, the story goes that Mario and Pauline are opening a new theme park when Donkey Kong gets mad about something and kidnaps her. Mario then sends his Minis after him in order to rescue her. Very basic and, unlike the last two games, it doesn’t have a twist ending – which was disappointing for me. It also provides the most menacing portrayal of modern Donkey Kong that I’ve ever seen and that’s not quite how I like to see him… but these are nitpicks, really.

In terms of what specifically makes this one more interesting than the other two, it’s hard to say. Overall presentation has been polished up, backgrounds look nicer, animations are all much more fluid and so forth – these may just be small things, but it all adds up and it contributed to my enjoyment of the game.

Ultimately, I think what I liked about this game, was that this seemed to be the point that they really perfected the Mini-Mario gameplay. You set off your Mini-Marios and then you use the stylus to manipulate the environment to guide them safely to the exit. You place platforms, ladders, conveyor belts and other items in just the right places for them to avoid enemies. You’ll know this if you’ve played the others, but it can be very satisfying to get them all to the end. By this point, their level designs were better than ever and it’s all very fun – never too easy, never too hard and certainly never too boring. The fact that you get to use the Mini versions of Donkey Kong, Pauline, Peach and Toad helps to add a further layer of variety too.

This is genuinely a good game and one that I would recommend. It may not stand out due to the fact that it’s one of three very similar games on the same console, but I don’t think that does anything to subtract from its individual merits. With a nice number of levels in the main game (with plenty of extras too unlock) plus the capacity to make your own stages, there’s a lot to this game.