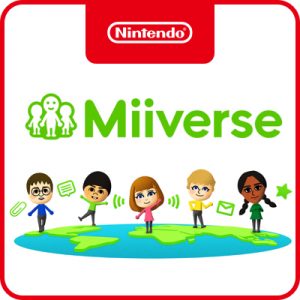 There has recently been a piece of news in the gaming world which has made me feel rather sad: that is the official discontinuation of Miiverse (which is going to happen later this year.) If you don’t know what Miiverse is, I guess the simplest way to explain it, is that it’s a sort of social media network which was accessible via Nintendo consoles.

I can honestly say that Miiverse enhanced my experience of many games on the Wii U and the 3DS. I like to play single player games the most (not that I don’t appreciate multiplayer) and the addition of Miiverse helped to make this very solitary activity feel like something which was more communal. It was a great feeling.

Let’s say I was playing Donkey Kong Land III, Game & Watch Gallery or some other equally old and obscure game; Miiverse gave me the opportunity to share my thoughts and observations about these games (along with screenshots) with people who were actually interested in them. I could make ridiculous jokes that nobody but a small number of people would get, but I’d be connected with that small number of people via Miiverse.

It wasn’t just the stuff that I’d share though, but also the opportunity to see what other people had shared. Sometimes I found out about cool secrets and glitches thanks to Miiverse posts and other times my attention was drawn to things in games which had been staring me in the face for years, but which I’d never noticed. People could comment on posts to start a dialogue with others and instead of just “liking” things like a lot of social media platforms, you could use your Mii to give different kinds of responses to things. It was cute and I appreciated it.

The more talented users would post illustrations they’d made of different gaming characters and so forth. Some of these were absolutely amazing and it was hard to believe they’d been made with nothing more than a stylus and a touch screen. Sure, there were a lot of bad posts too, but the good ones made it all worthwhile. It’s worrying to think that these works of art may be lost once the service goes down.

A lot of games integrated Miiverse really well too. For example, in Splatoon you could find graffiti on the walls and this graffiti would be made up of illustrations posted on Miiverse. Sometimes this lead to hilarious (and even surreal) results. Often it just took the form of people leaving comments about how they felt about certain parts of a game, but it was all good. Super Smash Bros. for Wii U even dedicated a whole level to Miiverse – which I guess means it exists in-universe for a lot of Nintendo characters (a fact which appeals to people like me.)

One thing I loved, was looking over my past Miiverse posts. It was fun and exciting to be reminded of all the games I’d played and all the different things which had come into my head as I did so. Once I just looked through all my posts back to the beginning and it was a lovely, nostalgic experience. I suppose it was kind of like a gaming-diary and it’s a terrible shame that I won’t have this in future.

I’ll miss Miiverse a lot. I sincerely hope that future Nintendo consoles will have a good replacement. It’s the main thing that I feel is missing as I play on my Nintendo Switch. I’m glad I was around to play it while it was here.