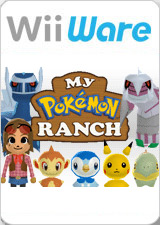 My Pokémon Ranch is one of only a few games that were exclusive, WiiWare games. This means that it was downloadable via the Wii Shop Channel and nowhere else. Sadly, the Wii Shop Channel is due to be discontinued soon and so I thought I had better review this game while it is still available! If you’re reading in the future, this is sadly probably going to be a game that has been lost to the ages.

Now, I know there are a lot of people who would claim that that is no real loss, however I would heartily disagree. The most common criticism directed at this game, is that it’s not really a “game” and that it, therefore, is not worth your money. I do actually kind of agree – as a standalone game, it doesn’t really work. The way I see it is that My Pokémon Ranch is an expansion to Pokémon Diamond Version and Pokémon Pearl Version and in that regard, it has a very high level of value.

The titular ranch is run by a woman named Hayley and she’ll ask you for specific Pokémon that she’d like to see added to the ranch. You transfer these Pokémon from either of the DS games mentioned above and they come through in very cute, miniature forms. You can then use toys to play with the Pokémon or add your Miis so that they can interact with them too. Watching the ranch fill up and seeing all the Pokémon playing together is very rewarding and it gives you a good incentive to keep playing Diamond and Pearl. It also provides you with a method for obtaining certain legendary Pokémon, such as Mew, which is pretty cool.

In essence, yes, it is a glorified expansion of the storage boxes in the main games, but I think it’s actually very cute and very nice, so I like it a lot. If you’re going to play either Diamond or Pearl then I recommend downloading this too. When Hayley requests specific Pokémon, she’ll tell you where you can find them and I find her guidance very useful for finding rarer Pokémon. Plus, various people can store their Pokémon in the ranch, which helps to further strengthen the social aspect of the series and lets you see your Pokémon interacting with those of your friends in a non-fight setting.

While it may be quite a simple game, it never cost very much money and I’ll always have fond memories of my many Pokémon marching past in their very cute ranch parade. I recommend it (but only to Diamond and Pearl players.)