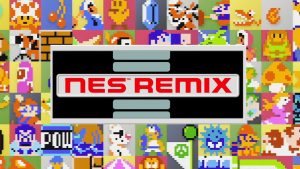 If you’ve ever played a WarioWare game before (and if you haven’t, you should give the series a try, it’s great!) then you’ll be familiar with 9-Volt’s collection of ‘microgames.’ For those not in the know, they are moments from classic Nintendo games where you have to quickly fulfill a certain objective – it’s very fun. NES Remix feels like the end result after somebody decided to take that formula from WarioWare and make it its own game.

The challenges you’re given are broken down by game, so if you had a particular favourite on the NES, you could enjoy tasks taken from that game. Take Super Mario Bros. for example: you might be tasked with simply completing one of the games levels, or you might have to defeat a certain enemy, or win a level while collecting enough coins. You’ll find similar challenges for Donkey Kong, Ice Climber, Balloon Fight and other iconic NES games. What you’re asked to do gets a little harder each time and you’re rewarded between one and three stars based on how well you do.

The process I’ve just described is something I found quite fun, but the real treasure within NES Remix is its remixes. In the context of this game, what “remix” means is that a section of one of these NES games has been taken and then changed in some way, often even spliced with another game. Some examples include Link (in his original Legend of Zelda form) having to rescue Pauline from Donkey Kong, having to do something in the original Mario Bros. while controlling two Marios, playing a level of Wrecking Crew with everything as a silhouette or playing Excitebike and only being able to see what the bike’s lights shine onto.

As it’s only a cheap, download game, I definitely recommend NES Remix as I had a good time with it and found it quite addictive. The way that you’re ranked with stars gives it quite a lot of replay value too, as it is satisfying to go back and improve your old scores. If you’re a big NES fan, I think you’re likely to love this, but even if you’re just a general Nintendo fan, it’s still worth playing.