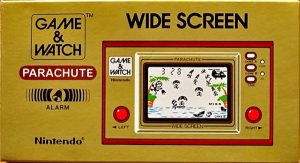 Parachute is one of the better known Game & Watches. It and Fire are the two games which serve as the biggest influences of the design of Mr. Game & Watch as we know him today. To be honest, the two of them are both quite similar games in general.

In this one, you play as a person in a rescue boat who moves back and forth between three different spots, in order to catch people (who are identical to Mr. Game & Watch) jumping out of a helicopter. There’s a constant stream of parachuters, so you’ve always got to be moving and you’ve always got to be ready. Where they fall determines the speed of their descent, so you’ll need to be strategic about your movements. And you know what happens if you aren’t ready to catch someone? If you let them fall into the water? Well, they get eaten alive by a shark. Dwell on that. They may look like generic silhouette people, but in their own world they’re sons and daughters, husbands and wives, brothers and sisters. If you don’t catch someone, you’re ruining lives. The stakes are high.

It kind of bothers me that one small life boat holds literally hundreds of people, but I suppose I shouldn’t be holding a Game & Watch to real life standards. As always, you’ve got a hard mode as well and you can also set an alarm. As Game & Watches go, this is one of the better ones. It’s easy to grasp and not too slow paced.