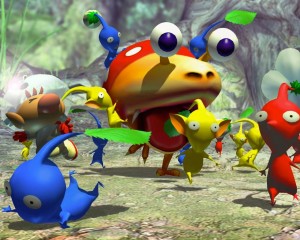 The Gamecube era was a time of experimentation for Nintendo and one of their biggest experiments during that time was starting the Pikmin series. Pikmin is definitely one of the most unique Nintendo franchises and this is the game that started it off.

In this game you play as Captain Olimar, who crashes his spaceship on a mysterious planet. Olimar’s ship is very badly damaged and pieces of it are scattered around several different areas on the planet. With the help of small creatures called Pikmin, Olimar has to make sure he survives on the strange planet while collecting the pieces he needs to rebuild his ship.

The thing about the planet Olimar has found himself on is that it seems very, very much like Earth, with the only problem being that Olimar is tiny (insect size, in fact) and he has to fight lots of other insect-like creatures. Olimar himself is very weak and cannot really fight, so he has to use huge hoards of Pikmin to fight for him.

The game plays as a real time strategy and Olimar commands up to one hundred Pikmin at once. They follow behind him in a huge group and can do all kinds of things; retrieve ship parts, build bridges, fight creatures and more. As Olimar you just throw them towards whatever you want done and they will do it. Different coloured Pikmin can do different things too; red are immune to fire, blue can breathe under water and yellow can carry bombs. It’s simple but effective. It’s very satisfying to perfectly strategise a fight against a huge creature and then retrieve a ship part and bring it back to the ship, all without having any Pikmin die. By the way, when any Pikmin do die, you’ll probably feel very guilty as they are very cute and innocent creatures.

What hangs over the whole game is the fact that Olimar only has thirty days’ worth of oxygen and after that, he will have to attempt to leave regardless of how many ship parts have been restored. This time limit gives the whole game a much appreciated sense of urgency – especially as you’re not given much guidance and can do things in whatever order you want. This coupled with the often rather ambient music creates a very atmospheric game. It may be a bit short, but Pikmin provides an excellent experience.