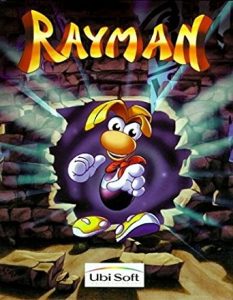 Rayman is a fondly remembered gaming icon of the 1990s and early 2000s and while he might not be considered as much of a big deal these days, his games are still fun to play. The original Rayman was released in 1995 and it’s an enjoyable 2D platformer which has aged quite well.

The story isn’t really much of a focus (even less so than other games in this genre.) All you really need to know is that he’s travelling through a strange and surreal world in order to rescue something called the Great Protoon from somebody named Mr. Dark. It sets up the game and it’s really all you need.

What I like so much about this game is that the worlds all look very beautiful (the art is very nice, especially for its time) and there’s a great soundtrack to accompany it. The music is often quite ambient and I sometimes get the impression that a lot of the strange and bizarre things I’m seeing are supposed to symbolise something more meaningful, though they’re almost certainly not.

Sometimes you’ll be going through jungles and caves, which are obviously fairly standard video game locales, but they’re portrayed really well here. Other times you’ll be walking through levels made of art supplies or musical notations, which is very unique. I have a personal preference for the ones which are grounded in reality (they have a certain fairy tale charm to them) but I basically like them all.

There is one main area where the game could be improved, however: the difficulty. It’s far too hard. Now, don’t get me wrong, I appreciate finely tuned platforming which is tough, but fair – it can be nice to really perfect your approach to a level so that you can win. Sadly, a lot of the tough sections in Rayman don’t feel fair to me. There’ll be obstacles flying all over the place  and everything that hits Rayman, pushes him back, often into deadly bottomless pits. It’s really infurating sometimes, especially near the end.

Speaking of the end, you need to find all of the collectables hidden in each world to access the final world… considering the difficulty in finishing some of them even once, this was not something I was willing to do. I usually like to complete every game I review but, sadly, finishing all but the final world will have to count as “completing” in this case.

But, overall, I’d hate to leave a negative impression of this game. The difficulty can get frustrating, sure, but I still had a good time with this game and genuinely enjoyed many of its levels. Plus, it was the game that gave us Rayman: iconic and limbless creature that he is. I’d say it’s worth a try.