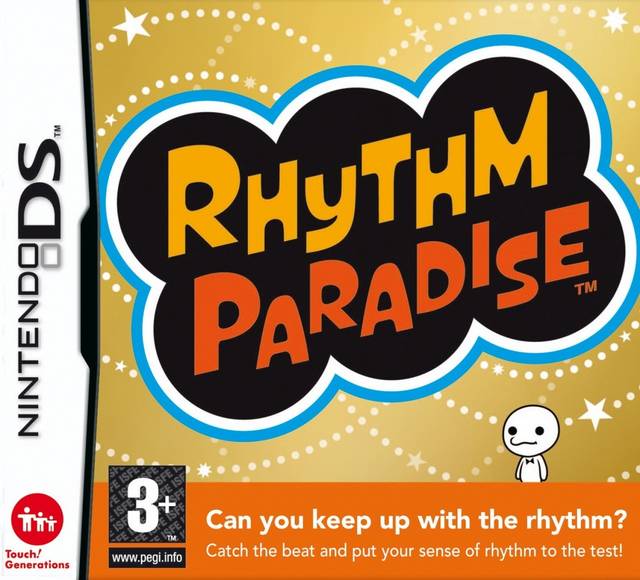 Rhythm Paradise for the Nintendo DS is actually the second game in the Rhythm Paradise series, though it was the first to be released outside of Japan. I was lucky enough to play the first game before I played this one and as that was a game I enjoyed very much, I was very excited for the sequel.

Sadly, I have to admit that I was slightly disappointed. The game is made up of various different tasks which are completed being doing things in tune to the music that’s playing. For example, you put robots together in a factory or harvest vegetables as a farmer. In the previous games, you had to press buttons in tune with the music, but this time you have to do different things on the touch screen. Perhaps it’s just a failing on my part, but this felt so much more inaccurate when compared to it’s Game Boy Advance prequel. So often I would tap the screen and it would think I was drawing a line, which then counted as me missing a beat. It was fine most of the time, but there were certain games where it came up a lot and I found it very frustrating.

But I don’t want to imply that this was a bad game. I enjoyed certain parts of it quite a lot and it left me with an overall positive impression. Like I mentioned above, Rhythm Paradise is made up of several smaller games/tasks and lacks an overall storyline. The games which I enjoyed the most were as follows: “Love Lab” which has you shaking up love potions in a science lab, “Shoot-‘Em-Up” which has you shooting down alien spaceships and “Karate Man” which returns from the previous game and has you punching items as they fly past you. That’s just three, but there were really quite a few that I enjoyed. It also includes the game “Glee Club” which wasn’t one of my favourites, but which introduced the Chorus Kids, who have been popular among fans. They’re basically a group of screaming children who you have to tap in time to make music from their screams.

On the whole, it’s a game which can be quite addicting and one which has a lot of humour. If you’re a perfectionist, you’ll enjoy replaying the games until you get a perfect ranking on them. Each time you get a good score on a game, you unlock another game and then you’ll be given remixes which put several of the games together. The music throughout the game is also fantastic and the fact that it sounds so good means that replaying harder levels never feels like much of a chore. It’s just a shame that it is occasionally let down by the touch controls.