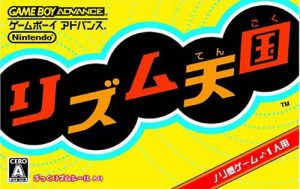 Rhythm Tengoku was a Japan-only Game Boy Advance game which was a semi spin-off of the WarioWare games. I say semi spin-off, because it’s connected in a somewhat unusual way: it takes the bizarre sense of humour, the mini-game based format and the exact same visual style (with some locations and other things looking identical, which presumably means it is set within Diamond City) but it’s mixed with a new rhythm-based gameplay.

You start by playing called “Karate Man” where you play as a man who has to punch objects that are thrown passed him in tune to a love song. Do well enough in this and you’ll unlock another game and it goes on like that. Other games which I found especially enjoyable included “Sneaky Spirits” where you have to shoot ghosts with a bow an arrow, “Vegta-Pull” where you have to pluck hairs from the faces of onion men and “Night Walk” where you hop across boxes in the night – all of these are done along to the beat of excellent music. Every so often you get “Remix” levels as well (which mix together a few of the games) and “Remix 4” has a song called “Wish Can’t Wait for You” which is actually a really amazing song which I now listen to all the time.

The one downside of the game is that, because it was never released outside of Japan, none of the in-game text is English and so sometimes I found it hard to know what exactly I was supposed to do in the games. I suppose I also would have liked a little more in the way of story and context (as there is essentially nothing at all) but this is a minor issue.

On the whole, this is an extremely addictive game which is almost therapeutic to play: there’s tonnes of replay value because you can always go back to improve your performance on a level, but even when you have the perfect rating, the games are all so fun that you’ll want to replay them for the pure pleasure of it. You get so into the games and the music that it’s just hypnotic. This is an amazing game and it’s a real shame it isn’t better known. Rating: 9.4/10