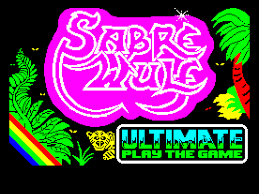 Sabre Wulf is one of the very early games made by Rare during their Ultimate Play the Game days. You play as Sabreman and have to find four pieces of an amulet in order to escape from a labyrinthine jungle (avoiding the titular Sabre Wulf in the process.)

First things first, I just want to say, I love this game. It may be old and simple, but it’s fun and that’s what’s most important. The game allows you to move around in all directions and you’re essentially exploring a massive maze. Something about the old graphics (with a lot of black) helped to set the feeling of the mysterious jungle for me. There’s also no background music (just blips for sound effects) and I also think that that helps to set the tone of a secluded jungle.

The jungle is pretty huge and you may find it hard to find everything, but I think the difficulty added to my enjoyment. It never really felt too hard, but was satisfyingly difficult. Having said that, there were occasionally things which were a bit unfair: for example, Sabreman’s controlling is ever so slightly slidey, which occasionally meant that I died because he moved further forward than I wanted him to.

Throughout the jungle, you’ll find animals (like rhinos and hippos), deadly insects and a hostile tribe of people. There’s also the unstoppable Sabre Wulf, which is always after you. Of course, to keep himself safe, Sabreman has a trusty sabre which he can use to destroy smaller threats and to keep people and bigger animals at bay. There are also various plants you can eat, each of which have different effects on you and make you immune to the damage of enemies.

When you first play, it might feel too hard (and I certainly felt that way), but after a few tries you should get into the swing of things. It has no save feature (other than scores) so you’ll have to do it in on sitting, unless you’re playing an emulation, such as the one in Rare Replay. Other than a few things like that, for a game of its age, this is very good indeed and I feel like later (more popular) titles, such as The Legend of Zelda, owe it a lot.

Buy it here as part of Rare Replay.