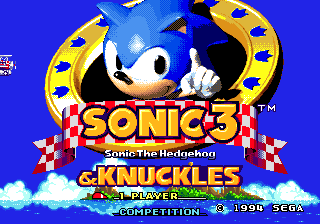 his is the third game in the classic Sonic the Hedgehog trilogy. You might think that it has a rubbish title and it does. The reason for this is that the game was kind of broken in half, the two games that it became when split in half were Sonic the Hedgehog 3 and Sonic & Knuckles; Sonic 3 & Knuckles is an ungraceful merging of the two. Even though these two were released as separate games, I’m going to review them as a single entity, as that’s how they were intended to be played.

As you can probably tell from the title, this game introduces us to a very important part of the Sonic franchise: Knuckles the Echidna. Throughout this game, Eggman plays Sonic and Knuckles against one another so that he can work on his Death Egg and get it launched into space. Sonic aims to stop Eggman’s plans to relaunch the Death Egg and Knuckles fights to protect his home and the Master Emerald from Sonic and robotic menaces. Also, Tails comes along with Sonic. It’s nice that the story feels somewhat more complex and developed than in the previous games.

In terms of gameplay, I feel like this was the game where they really perfected the classic 2D Sonic formula. You’ve got bits where you go fast and bits where you have to think about what to do before you can go fast again. There even bits where going fast is a necessity, for example, escaping from a building which is collapsing. Of course, there’s still the odd annoying or frustrating bit (which is a shame) but ultimately I had a great deal of fun playing this game. Knuckles is also a playable character and he has the power to glide and climb, which means that the game feels quite different when you’re him. The story is different for both Sonic and Knuckles, so there’s a good reason to go through it twice. This time you can actually save your progress too, which is a huge improvement.

A game’s soundtrack always has a significant impact on how enjoyable it is to play and while I was never particularly impressed with the soundtracks of the other early Sonic games, this one really won me over. Though he is uncredited, the game’s soundtrack was actually composed by Michael Jackson. It really shows too, because some of the music in this game is amazing and really helps to set the tone in certain areas. I remember getting to the end of the game and listening to a medley of the game’s music and thinking about what a great experience it had all been.

Overall, while other Sonic games have failed to live up to their reputation for me, I really ‘got’ this one. The game felt very “cool” and going through it really felt like going on a journey, at the end of which I had a newfound respect and reverence for the entire Sonic the Hedgehog franchise. I was honestly sad to get to the end. Yes, the game has it’s flaws and was by no means perfect, but it’s definitely worth playing.