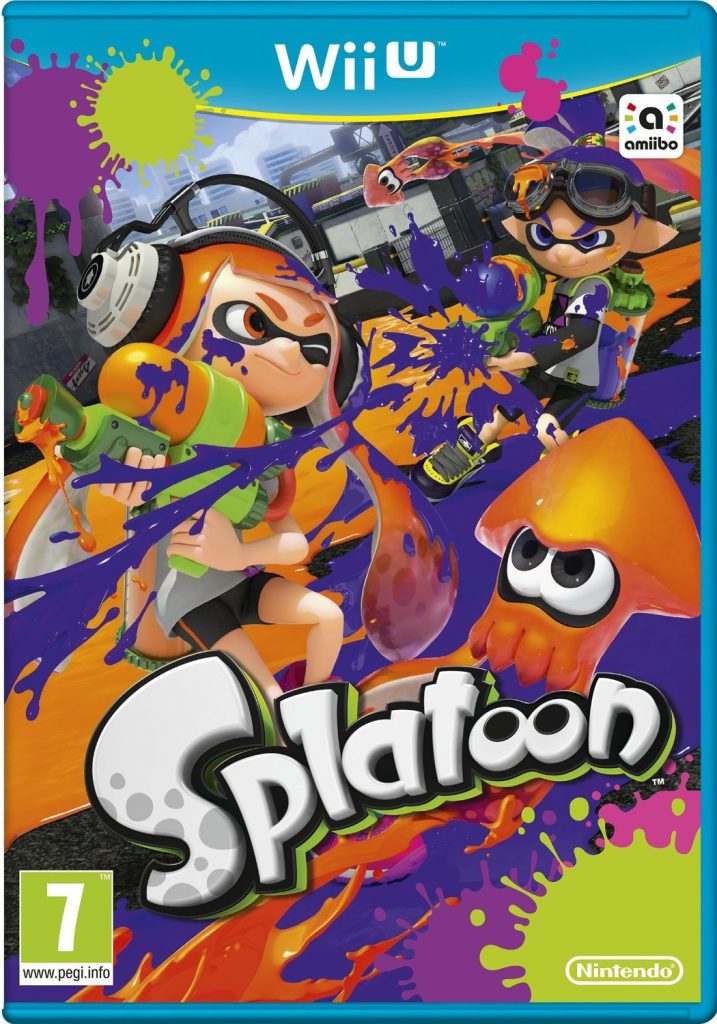 In 2015, Splatoon was advertised as the big, new Nintendo franchise. There was a lot of buzz about it and a lot of people were excited. To be honest, from what I saw of it, I wasn’t that interested. Sure, I’m a big Nintendo fan, but online-based third person shooters just aren’t my thing. I’ll pick it up cheap at some point down the line, I thought to myself. Then one day I happened to play it at a friend’s house. It seemed pretty good. So I did buy it and I loved it. If you’ve not been impressed by what you’ve seen, the same my happen to you.

Splatoon is set in a city called Inkopolis and you play as an Inkling. Inklings are a race of humanoid squids who can swim through ink. They participate in ink-based shoot-outs where each participant has a different type of weapon which spreads ink. The battles are broken into two teams, each a different colour. If your Inkling is shot by rival ink, they’ll explode and reform at the stage’s starting point. However, it is also possible to turn into squid form and swim through the spatterings of ink of your colour on the floors and walls at higher speeds. The winner is the team who have managed to cover more of the stage in their colour of ink, rather than the team who kill the most rivals.

Battles in Splatoon are fast paced and fun. Your Inkling can level up (gaining different numbers of experience points based on how well they did in battle) and while leveling up has no real baring on the character or their power levels, your level is a good indicator of the number of times you’ve won. I found it really addictive and could easily pass a lot of time playing battle after battle.

Part of what makes playing Splatoon so fun is the fact that all of the levels had a really great, urban atmosphere to them. One stage takes place on the roof of some tower blocks, one of them takes place around some apartment buildings, another within a factory and one is even in a game developer’s head quarters. They’re all excellent locations and you can tell they’ve all had a lot of effort put into them. They’ve got some really great little details (that you’ll notice if you look out for them) including pictures of Bloopers (from Super Mario games) and Octoroks (from The Legend of Zelda games) which I felt were a good reflection of the game’s Nintendo pedigree. The music compliments the feel of these locations really well too and it made the world feel really immersive.

While the multiplayer is by far the better part of the game, there is still a moderately substantial single player mode. The levels in this mode were fun, but were mostly made up of platforms floating in a void (a bit like Super Mario Galaxy) which was a lot less immersive. Having said that, there are secret items called “Sunken Scrolls” which you can collect in these levels – these are records of the history of Inkopolis and, I don’t want to spoil anything, but Splatoon has an amazing backstory which is actually pretty dark.

An interesting feature of the online mode (which sadly has been discontinued) was something called Splatfests. These would have you voting between one of two things (e.g. dogs vs. cats) and then fighting in a team to decide your side, with a winner announced at the end of a set period. During these events, everything was changed to a nighttime aesthetic and cool, new music played. These were fun to take part in and often had odd themes, there were questions about SpongeBob SquarePants, about whether Pokémon Red Version or Pokémon Blue Version was better and even one about Miitomo.

That covers just about everything. There’s also a less good local multiplayer mode (which you likely will ignore) and you can unlock single player level variations and items by using Amiibo. Everything you do in the game also earns you money, which significantly increases replayability due to the fact that there are shops you can visit to buy new clothes and weapons. Overall, it’s a fantastically addictive game and one of the best games on the Wii U. I look forward to the future of the franchise.