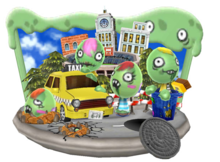 The StreetPass 3DS games are little games which feature your Mii in various different situations where they have to do certain things by interacting with other Miis. This time, your Mii has found themselves caught up in the middle of a zombie apocalypse, which is quite a shocking and violent turn of events, if you ask me!

Each time you walk past some people on the street and ‘StreetPass’ them, their Mii will appear in your 3DS and in StreetPass Zombies, the people you pass in real life take the form of survivors hiding from the zombies. One gives you a weapon (which are all comedic things, like a pop-up book, a Wii Remote, a pillow, etc.) and then you go through different deserted locations, fighting loads of kinds of zombies and rescuing the others on the way.

But it’s not just mindless zombie fighting, it has a story to it. Your Mii is riding along on a train when zombies attack the train. Before long, your Mii is contacted by somebody named Dr. Scarlet. She knows what’s going on and has a plan to resolve things – your Mii is the one who needs to carry out that plan! It sounds like it will be quite simple, but things actually take a rather unexpected turn towards the end.

What struck me about this game is the fact that it really is very dark for a Mii game. Many of the zombies you are fighting have personality quirks that are obviously supposed to be carried over from when that person was alive – it felt quite sad to me to know that I was destroying the reanimated carcasses of actual dead people. This darkness goes even further when you realise that the Miis of people you StreetPass can be turned into zombies! So, in this game, you can see fictional versions of real, every day people killed by zombies. This made me sad whenever I gave it much thought.

On the whole, this was a very enjoyable game. Every level was very atmospheric and there was more than enough charm and humour. What I also liked it that it saves every kind of zombie and weapon you encounter along the way, letting you find out their names and look back over them at your leisure. I appreciate little things like this and it gives a good motivation for completionists to replay the game. It’s definitely worth the price of the download! Rating: 8/10