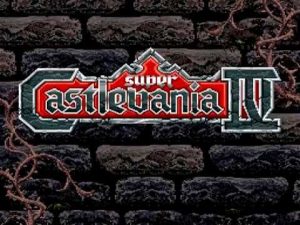 Imagine a field in the middle of the night – it’s quiet and atmospheric with a light mist hanging over everything. It’s quite a beautiful scene, isn’t it? And you may not think that the Super Nintendo would be the best platform on which to present this scene, but you’d be wrong. Super Castlevania IV is one of the most beautiful and ambient games I’ve ever played, which it’s all the more impressive when you consider the technical limitations of the time. There’s one moment in particular, where you can see living horse skeletons in a field in the distance and it endears me so much every time I see them. The little details make all the difference.

Essentially, this is a reimagining of the first game in the series. On the one hand, it does mean that it doesn’t do anything new in terms of story, but on the other, it also means that it’s very accessible. All you need to know is that Simon Belmont is travelling across the lands in order to kill Count Dracula.

This was the first main instalment in the series to not be released on the NES and you can see a pretty significant improvement over the last three games. The others were all very hard, in part due to the fact that you were very limited in your movements. Now you have much more control over your jumps and your whip (which, for those who don’t know, is your primary form of attack) which makes a huge difference. If you’d been put off of playing the series due to these issues in the previous games, know that they have now been resolved.

Honestly, Super Castlevania IV is a real classic. If you love 2D platforming, then you’re sure to have a very good time with it. It may be a little on the hard side in the later levels, but never unreasonably so (except maybe on the final boss, who is much more mobile than you) and I feel as though they’ve really refined the Castlevania formula by this point. Plus, the soundtrack is absolutely sublime – not only do all the tracks perfectly suit the places they’re played in, but I feel like all of the game’s sound effects play a big role in setting the tone just right too.

So if you wanted to get into classic Castlevania, make this the game you try. It’s one of the best games on the SNES and something which holds up to this day.