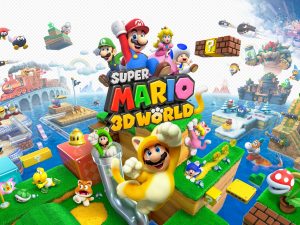 I don’t know why, but Super Mario 3D World never looked that appealing to me. I just thought it seemed like a rather generic Mario game, so for a long time, I just didn’t buy it. Earlier this year, I was bought it as a gift and I realise that my initial reaction was all wrong. I can only say that I wish I’d bought it sooner, as this game is a delight.

While many of the core games in the series uses the storyline of Peach getting kidnapped by Bowser, this one changes things nicely by having Bowser kidnap Sprixie Princesses (which are small fairy creatures) instead. This may sound like a minor, insignificant detail, but it has one benefit: it allows the team from Super Mario Bros. 2 to return, with Mario, Luigi, Peach and Toad all playable and all quite different. The only very minor niggle I have is that it’s a blue Toad, rather than the Toad, as it was in the earlier game… but it doesn’t really matter.

The game is a lot like an enhanced version of Super Mario 3D Land and not just in terms of having more playable characters. The levels have a much greater level of diversity and, as a result, were more memorable: you get to ride Plessie (a dinosaur) down a river, you explore a spooky old haunted house in black and white, find keys to progress a baron snowy wilderness, use a canon power up to attack enemies in space or get though a level on the back of a moving train. Many of these new levels felt like a breath of fresh air, after some Mario games had used the same archetypes so many times.

The soundtrack is also really entertaining. There’s a very jazzy sort of feel to it, which is quite new for the series. Instead of remixing the same old tunes over and over, this is a game that makes the catchy tunes which will get remixed in later games. Bowser’s new theme song, in particular, was a favourite aspect of mine.

It’s also worth mentioning the game’s new power up: the Super Bell. Collecting it gives your character a cat suit which makes them walk on all fours, gives them the ability to climb walls, gives them a new pounce move and lets them swipe at enemies. At first it felt like a bit of a gimmick and I wasn’t too fond of it, but over time it grew on me and at this point I really like it. I hope that we will see it return in future games.

This is also the game which introduced Captain Toad as a playable character (though he had been an NPC before) which ultimately lead to him being the star of his own game. What makes him different to all the others is that he is unable to jump and he appears in special, smaller levels specifically designed with his limited abilities in mind. They were pretty fun and added a nice new type of challenge every now and then. There’s also a secret unlockable character – I won’t say who it was (to avoid spoilers) but I will say that once I unlocked her, I didn’t really use anybody else anymore…

Overall, a solid installment in the series. While I may generally prefer the more open 3D games, I can’t deny that I had a lot of fun with this game. I played it alone, but there is also the option to play with up to three other people at the same time, which must be fantastic. As a nice bonus, you also get the game Luigi Bros. which is Mario Bros. but with Luigi as the main character (as he should be). As it’s very easy to find this quite cheap these days, I definitely recommend it.