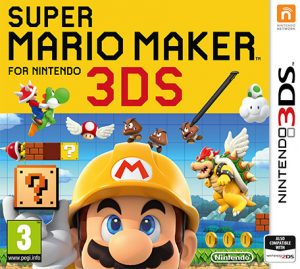 Earlier this year, I wrote a review of Super Mario Maker and this review of the 3DS version will kind of be written as a comparative, so you might like to read the original review before drawing any conclusions.

The general consensus on this game seems to be that it is a weaker, watered down copy of the original. While I do agree that it is weaker in some aspects, I also feels that it has some unique strengths of its own and that it can offer some experiences which the original cannot. A lot of people have dismissed this game outright, but I don’t think that’s fair at all.

One of my favourite things about Super Mario Maker for Nintendo 3DS is that it has quite a large number of pre-made levels.  You play through these levels in order to unlock the different customisation items for your own levels. These levels are some of the best 2D Mario courses that I’ve ever played – they’re really fun and original and the game is worth buying for the opportunity to play them alone.

Another thing which I quite enjoyed, was the fact that there are a few nice little interactions between Mary O. and Yamamura (the pigeon) the game’s two instructors. The two of them basically give little tutorials for each of the different things you can use to make your levels. They’re in the original too, but there’s more of them this time and I appreciate it. They’re quite funny together.

Having said that, sometimes the tutorials felt a little unnecessary. It was also somewhat frustrating that you had to complete these levels (some of which were pretty hard) in order to unlock all of the different customisation options – some of you will just want to start building right away. That was what I wanted to do, at least.

Plus, there are a lot of features which have been removed. There are no longer any Mystery Mushrooms, which removes the ability to play as various other characters from the Super Mario series and beyond. You also can’t send things directly to your friends online, only in person, which is a bit frustrating. The reason for this is that you can’t even upload the levels you create onto the internet and being unable to share your work is a little disappointing. You can, at least, still play endless levels online… although you can’t search for specific levels. These are the things which most people take issue with.

However, while the game has flaws (at least in comparison to the console counterpart) I think it’s pretty good overall and something which you’ll still enjoy, especially if you are a Super Mario fan. I think the general consensus is a little too negative.