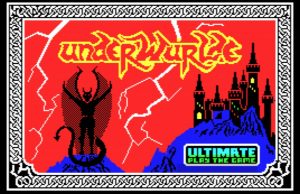 Sabreman is essentially the mascot of Ultimate Play the Game (a.k.a. early Rare Ltd.) and when I played his first game, Sabre Wulf I was very impressed. Sure it had noticeably aged, but it was really good for its time and it was still fun for me to play (from a modern perspective.) I was very excited to continue playing through the series and went into the sequel, Underwurlde, with very high hopes. But perhaps I set those hopes too high because, sadly, I was disappointed.

While the first game had a sort of top down view and allowed you to move in four different directions to explore the jungle, the sequel has a side-scrolling form of gameplay (except, loading new screens, instead of scrolling.) It’s a very primitive form of the “Metroidvania” game and, in it, Sabreman is trying to escape from the Underwurlde which, spoiler alert, he was teleported to at the end of the last game. In theory, it could have been just as good as its prequel.

The problem is that the physics are really weird. Sabreman can only do very limited jumps (hops of exact distances in certain directions) and he bounces all over the place if he hits anything. This includes walls, platforms and, most annoyingly, enemies. While enemies in most games will hurt or kill you, in Underwurlde they push you and so going anywhere becomes very annoying. You only die if you get pushed down large chasms and end up falling down a great distance.

You can defend yourself though! Now, as it’s Sabreman, you’d think that he’d have his trusty sabre, like he did in the previous game, but nope. This time, he fires projectiles – throwing knives, slinging rocks etc. But, for some reason, he just throws them erratically in the direction that he’s facing. There’s no aiming or anything like that, which means he’ll sometimes miss enemies who are right in front of him.

On the subject of those chasms that I mentioned earlier, getting up and down them is really annoying too. Sabreman fastens a rope to the ceiling of the cave and slowly lowers himself down, but the enemies keep coming and can knock him down (killing him) and sometimes giant stalactites will randomly fall on him too (also killing him.) And how do you climb back up these chasms? Why you wait for bubbles to come out of craters and then ride them up, of course! But look out for the hundreds of flying enemies which will try and push you off…

I feel like it could have been a good game. Exploring the Underwurlde to find and destroy three guardian monsters so that you can escape is a great concept for a game… It was just executed so poorly (in part, due to the limitations of the time.) After how much I liked the first game, this felt like a let down and I only recommend it to the most dedicated of Rare fans.