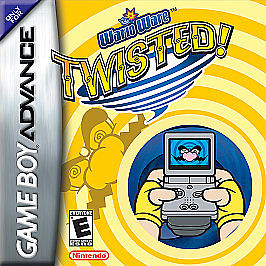 When games use motion controls and other gimmicks, there’s always an element of concern going in. It will either be really intuitive and will help to enhance your overall gaming experience or it will feel forced and just make things annoying and unenjoyable. WarioWare: Twisted! is a Game Boy Advance game with a special tilt sensor fitted into the cartridge which allows you to play by tilting your console… Thankfully, it’s one of those times where the overall experience is improved.

This is the second proper Wario game to be based around microgames and for those who don’t know, let me explain the premise. You’re given very short (and often very zany) little tasks to do within a few seconds and these are called microgames. You’re given several in succession and the goal is to get the highest possible score (or to clear a set number to clear the level you’re on.) The sheer randomness of these games is quite amusing and the concept is very addictive.

While the first game used conventional controls, this one is often entirely controled by tilting (though buttons are sometimes used as well.) Let me give some examples of what you’ll be doing: one of the games has you tilting your GBA back and forth in order to flip over an upturned Koopa. One has you shaking a bottle enough that it will explode. Another has you bouncing food at the right angle so that it can get down a person’s esophagus. It’s the kind of thing which is really hard to convey in words, but the absurd visuals, excellent soundtrack and cameos from many well-known Nintendo characters make it very enjoyable.

Another bonus, for me, is that I really like Wario and the other characters. They all have wacky storylines which unfold if you can win the microgames. Wario has somehow been merged with a clock and needs to turn back. His friend Mona (owner of Mona Pizza) goes to war with rival business, Pizza Dinosaur. 9-Volt, a huge Nintendo fan, wants to introduce his friend 18-Volt to the world of Nintendo. Jimmy T. and his family want to be the coolest dancers at the disco. I shan’t mention all of them, but this is one thing I find particularly charming about WarioWare games.

Overall, it’s a fantastic game and even better than its prequel. I really cannot overstate the joy of the tilt controls – it’s like the controller is an extension of yourself and I think that’s how a game controller should feel. Since it’s made up of so many little facets, I can’t really mention everything, but I will add that I was very pleased by an endless mini-game which has you making sheep jump over a fence to help someone fall asleep. A wonderful idea. When you’ve got a game which is this enjoyable and topped off with wonderful presentation (in terms of audio and visuals) you know it’s a good one. This is probably the best Wario game.