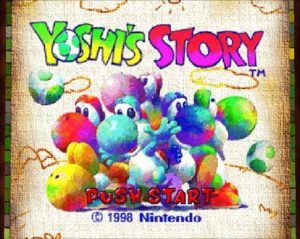 Ever since he first appeared in Super Mario World, Yoshi had been a very popular character. Not only did he become a core part of the Super Mario games (appearing in most of the games in some capacity) but he became the star of his own sub-series of games too. The thing is though, Mario himself always seemed to be in these games as well (even if just as a baby) which I feel robbed the series of its own identity somewhat. Yoshi’s Story was Yoshi’s first adventure not to feature Mario, firmly cementing his franchise as something that could stand without Mario to draw people in (although Bowser is still in the game, as a baby.)

What makes this game quite unique, is that unlike most 2D platformers, it isn’t based around getting from point A to point B, but rather eating a certain number of fruits within a set area to proceed. This puts the emphasis on exploration, which I appreciate as there are actually some pretty nice secrets to be found in these levels.

In terms of what they actually are, you’l find an array of tropical locations, all presented in a sort of “home made” style – each level looks like it was made out of a combination of rubber, cloth and other material. It’s a nice aesthetic – although it does sometimes look a bit weird. Levels include ocean depths, spooky caves, castles, tropical island landscapes and even snowy fields. They’re a pleasure to navigate.

And it’s not just the levels that are nice, but the Yoshis themselves too. They’re adorable, more so than ever before in this game. They have very cute, baby-like voices and all of their little animations (for example, walking on the spot saying “dum dum dum”) make them so endearing. They’re so cute, in fact, that you’ll probably be very upset when you lose a life and you see a Yoshi in tears, being carried away by Bowser’s Toadies. Heartbreaking.

The main problem with Yoshi’s Story is that it is very short (and also quite easy.) You only have to win six levels to beat the “story” of the game. It makes up for it by letting you take different paths and do different levels through each play through (assuming you pick up enough collectable hearts on the way) and by giving you the extra challenge of winning by only eating melons (and none of the other fruits), which is quite tricky.

At times, I also felt like the designs of the enemies were really weird (looking like awkward mishmashes of rubbery blobs) and these bad designs honestly weakened the experience for me. The soundtrack was another thing: sometimes it was bizarre and incorporated human voices in an almost unsettling way – though I must admit that other tracks were quite good.

Overall, I suppose you could say that it was a mixed back. Yes, the game did have some very good features, but it was weaker in other ways too. Nonetheless, I think it’s something which just about anybody could enjoy. It might not be the best 2D platformer Nintendo has done, but it’s certainly not the worst either.