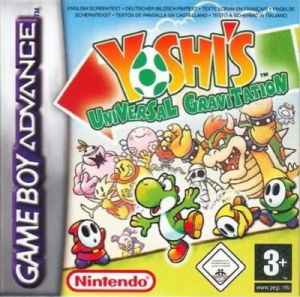 This is a game that, in concept, sounded like it could be really good. I love Yoshi games and the idea of merging that formula with gravity-altering gyroscopic controls seemed really exciting. But could such a nice concept really succeed in delivering the wonderful experience it seemed to promise?

The game starts with Bowser invading Yoshi’s Island along with a large number of his minions. As Bowser and his army are deemed to be a significant threat, a strange spirit called Hongo decided to trap the whole of Yoshi’s Island within a “Forbidden Pop-Up Book” to eliminate Bowser’s threat. Yoshi is naturally unhappy about being sealed within a forbidden book and meets another spirit, who gives him the power to tilt the entire world, which he hopes he will be able to use to defeat Bowser, so that Yoshi’s Island can be freed. So far so good: I don’t expect Yoshi games to have much of a story, but I appreciate the effort that went into it.

Sadly, no matter how much I appreciate the story, it can’t make up for sub-par gameplay. The levels are nothing like the levels in other Yoshi games – in the past, you’d have big levels to progress through and explore, but this time you’re making your way through a string of small areas and rooms that all involve some form of tilt-based puzzle. The rooms lack variety and often get boring or frustrating.

In Super Mario World 2: Yoshi’s Island, Yoshi can transform into a helicopter (and other vehicles) and it was pretty cool. This game brings back his transformation abilities in a way that’s definitely not cool. Yoshi can, for example, turn into “Ball Yoshi” and then he just turns into a ball and starts bouncing continuously – you need to tilt your Game Boy Advance just right so that he’ll bounce at the right angles and make his way through the room. Usually, these rooms just consist of you bouncing on blocks or enemies to break them. Other times he’ll transform into “Ship Yoshi” and he’ll just sail forward through water while you tilt the console to alter the water level – generally, you’re just avoiding blocks which can kill you because these sections are auto-scrolling.

In order to offer you some variety, different spirits will give you different requirements which need to be met as you get through the level. One, for example, will ask you to collect as many coins as you can. Sounds reasonable, but then when you need to collect coins, you’ll have loads of Ball Yoshi segments where you can’t properly control him and he bounces to the exit and not the coins. Other times you’ll have to get through a level while killing as small a number of enemies as you can – sounds like a pretty cool idea, but then those levels are all built around defeating loads of enemies. Ironically, the levels where you aren’t supposed to hurt enemies have significantly more of them and they’re always the weakest ones and the ones that are easiest to defeat.

The levels all look very bland too and its soundtrack was so uninspired that I can’t actually remember any of the songs from the game at the moment. The tilting ultimately ends up being used in ways that are pretty much just annoying too. As well as the examples I mentioned above, you’ll have to tilt the screen to one side when standing on a ball, so that it can roll over spikes, or back and forth to get a wrecking ball to work. When it’s not used in really pointless and simple ways, it’s used in really complex ways which are difficult to do (like tilting different platforms pointing in different directions as you jump across them to traverse bottomless pits) and there’s no fun middle ground.

One last thing is Yoshi himself. He doesn’t lay eggs when eating enemies anymore and egg throwing (a main part of the other games) is not included at all.  He also seems unable to jump very far, which is quite a contrast to his previous appearances. A part of me almost thinks that he may not have originally been in the game, but that he (and other elements from the series) could have been added to the game during the development to make it more marketable – it would explain the original characters and the lack of similarities to the rest of the series.

Overall, there are parts of it that are okay, but not one aspect of the game is what I would call “really good.”