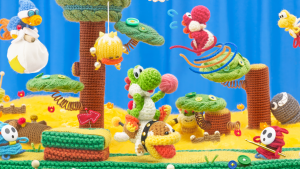 Yoshi’s Woolly World  is Yoshi’s first HD adventure and the opportunity was taken to make things very visually appealing. Obviously the characters in Yoshi games are not hugely realistic, so instead of aiming for realism with the HD graphics, they decided to try and make everything look like it’s made of wool. It looks wonderful.

As with almost every other Yoshi game, Yoshi’s Woolly World is a 2D platformer, In some regards a lot of this is retreading old ground, but the old ground is good fun, so I wouldn’t like to complain. I wouldn’t like to say that this game does nothing new either; the bosses all make good use of being in a 3D plane and so do a few of the levels. It’s a pleasant mixture of new ideas along with the familiar.

But let’s talk about the story (since that’s always important to me.) The fact that everything is made of wool is not just an art style, but also a plot device. Kamek travels to Craft Island turns several Yoshis into balls of wool and then steals them for Baby Bowser; two Yoshis remain and must reform their friends and defeat Baby Bowser. It’s a little hard to place this in regards to other Yoshi and Mario games and I would have liked a slightly more comprehensive story, but I didn’t mind too much. Essentially, this is entirely standalone.

If I were to sum up how it feels to play Yoshi’s Woolly World I’d use one word: pleasant.  The levels are fun and never too easy or too hard. Visually, everything looks nice and relaxing. The music is enjoyable and has a kind of “good time” feel to it. Actually, speaking of the music, there were one or two times where it was absolutely sublime. The soundtrack is good, but if it had all been on the level of the best tracks… wow.

Beyond the main game, there are a few lovely little extras. Firstly, the game is compatible with Amiibo and every one that you scan unlocks you a Yoshi with colours that looks like the character whose Amiibo you scanned. I really loved playing as Donkey Kong Yoshi, Lucina Yoshi and Ness Yoshi in particular. Another thing I liked a lot was that there’s a bestiary which fills up with all the enemy creatures you’ve seen, giving you their names and so forth – I always appreciate features like this. There’s also a cooperative mode, which is good to have if you prefer to play things with a friend.

On the whole, I wouldn’t say that Yoshi’s Woolly World was an especially groundbreaking game, but there also aren’t many bad things I can say about it either (it is sometimes hard to find health though). I used to play a level each day after work (when I had a chance) and it was really nice to unwind to. I guess I just maybe wish it could have done something a little more. Rating: 8.3/10